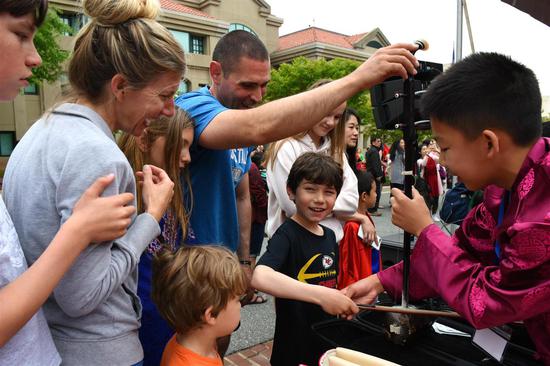 Visitors experience the traditional Chinese musical instrument erhu at an event hosted by the Chinese embassy in the United States in Washington on Saturday. （Photo: China News Service/Chen Mengtong）

Sarah Daley, a student at the University of Virginia, has deep connections with China. She spent the summer of 2018 teaching English in Hebei province and has a younger sister who was adopted from China in 2009. Both experiences left her with positive impressions of Chinese people and long-lasting friendships.

Those connections led to Daley being honored by the Chinese embassy in the United States during an award ceremony in Washington on Saturday, after she shared her stories with the world through an event hosted by the embassy and China Daily.

"The overall stability of China-U.S. relations over the past four decades has been a blessing to not only our two countries, but the whole world," said Cui Tiankai, Chinese ambassador to the U.S., in his remarks during the awards presentation.

"And the essence of the 40-year story is amity between the peoples, which lays the foundation for and shapes the future of our relations," he said, adding that the stories shared by peoples from the two countries through the My China Album series will always "be a source of inspiration and motivation for us".

Hundreds of U.S. citizens participated in the series from Feb 6 to April 19, sharing their personal stories about China through photos and captions. Ten of the participants were recognized for their genuine and touching stories.

"I was so honored to win first place in this year's My China Album," said Max Horne, an incoming Harvard University freshman who visited Yunnan province years ago and studied the Naxi culture, a local ethnic group. "There's endless culture for us to appreciate."

He speaks fluent Mandarin and planned to continue his study of Chinese history and religious traditions in college. Horne began studying Chinese in fourth grade, and it's "both a personal journey and an intellectual journey", he said.

Charlotte Christensen, vice-president of the Oregon China Council, has worked for years with Chinese people and organizations.

Christensen, who took second prize, also witnessed friendships going beyond the personal level. The state of Oregon developed a sister-state/province relationship with Fujian province 35 years ago and a state/municipality relationship with Tianjin in 2014.

"China raised 800 million of her people from poverty and made it a priority to restore her natural environment to become an ecological civilization," she said.