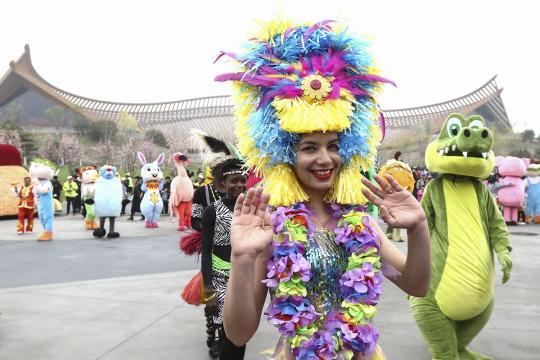 Performers take part in a parade at the International Horticultural Exhibition in Beijing on Monday. (ZOU HONG/CHINA DAILY)

The number of visitors to the International Horticultural Exhibition in Beijing reached 35,000 by 7 pm on the event's opening day on Monday, according to the expo's coordination bureau.

Early Monday morning, a flock of visitors formed a line as they waited to get into the park in Beijing's northwestern Yanqing district at the 9 am opening. The event continues for 161 additional days.

Cai Qi, Party secretary of the capital and director of the expo's executive committee, announced the opening of the park in front of the China Pavilion, one of the main sites for horticultural exhibitions at the foot of the Great Wall.

Near the entrance to the China Pavilion, a girl dressed like a flower helped draw tourists to visit.

Wang Enlan, a 70-year-old Beijing resident, had spent a month planning a visit to the expo park on its opening day. She and her husband spent the night in Yanqing on Sunday, and she said they couldn't wait to get in.

"We drove about 60 kilometers from Xicheng district to see the big event, which is totally worth it," Wang said. "I will bring my grandson to the expo during his summer vacation."

As an A1-level expo－the highest rank－the event has scheduled more than 2,500 activities of many kinds. It expects to see some 16 million visitors from home and abroad.

More than 400 volunteers in blue and white uniforms were on duty on the first day in various places around the expo park. They provided many types of assistance, such as translation and giving directions.

Jiang Zehui, chairwoman of the China Flower Association, said the opening means a lot to the horticulture industry since the exhibition hit a record high in terms of participating countries. Jiang, who spoke during a visit to INBAR Garden, which demonstrates bamboo and rattan's contribution to green development, said it also is a way to raise people's awareness about embracing a green lifestyle.

This is the second time China has hosted an A1-level horticulture expo, the first being in 1999 in Kunming, Yunnan province.