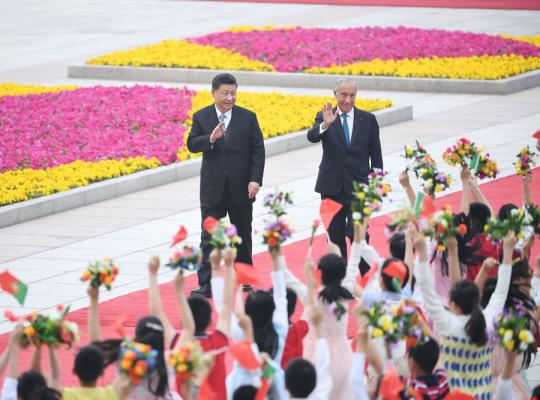 President Xi Jinping and Portuguese President Marcelo Rebelo de Sousa greet flower-waving children during a ceremony at the Great Hall of the People in Beijing on Monday. (RAO AIMIN / XINHUA)

China and Portugal signed a series of cooperation documents on Monday — including a framework agreement on third-party market cooperation — to strengthen their bilateral ties.

President Xi Jinping and Portuguese President Marcelo Rebelo de Sousa witnessed the signing of the documents in the Great Hall of the People in Beijing.

In talks with Rebelo de Sousa, Xi said China and Portugal are important strategic partners for each other, with great convergence in their interests and strong complementary aspects in their economies.

He called on the two countries to deepen all-around cooperation and build the comprehensive strategic partnership between China and Portugal to a higher-level, with broader vision and greater vitality.

Xi said the two countries should strengthen high-level exchanges and value their respective core interests and major concerns based on mutual respect and understanding.

Saying China views Portugal as a significant partner in jointly building the Belt and Road, Xi called for the strengthening of bilateral cooperation in fields such as trade, investment, energy and infrastructure.

Xi added that China stands ready to work with the European nation to advance more productive cooperation between China and Portuguese-speaking countries.

The Portuguese president is in Beijing on a state visit. He also attended the Second Belt and Road Forum for International Cooperation, which concluded on Saturday.

Bilateral trade reached over $6 billion last year, a year-on-year increase of 7.4 percent, according to the Ministry of Commerce.

Rebelo de Sousa said the two countries should translate their long-term friendship into future-oriented partnership, adding that he is fully confident of the prospects of the ties between them.

He said his attendance at the forum demonstrates his country's resolute support for the initiative. Portugal wants to build even closer links with China in trade, investment, science and technologies and culture, and develop the third-party market cooperation, he said.