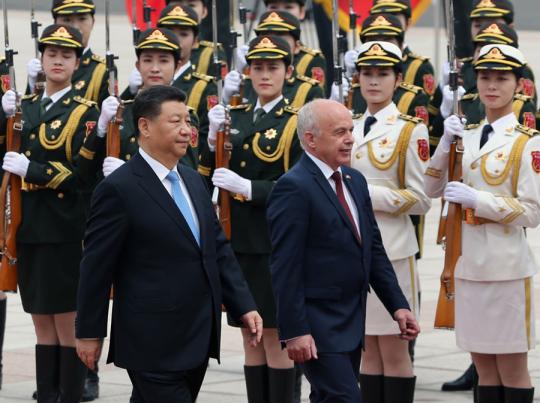 China and Switzerland should make joint building of the Belt and Road into a new highlight of bilateral cooperation and firmly safeguard economic globalization and trade liberalization, President Xi Jinping said on Monday.

Xi spoke during a meeting with Swiss Confederation President Ueli Maurer, who is to conclude his eight-day state visit to China on Tuesday.

Noting that China's establishment of a bilateral innovative strategic partnership in 2016 with Switzerland was the first ever created with another country, Xi said that China is ready to work with the European country to further strategic cooperation.

Xi also underscored the importance of following a pioneering spirit, recalling that Swiss businesses began to explore the Chinese market soon after the country's reform and opening-up began.

Those businesses have become the first beneficiaries in China's new round of opening-up, Xi said, adding that Switzerland has also led European Union nations by signing a free-trade agreement with China.

He called upon both sides to give play to the opening-up spirit, which features cooperation and win-win outcomes.

He also pledged that China will continue to create an open and fair business environment for foreign enterprises, including those from Switzerland.

Maurer said both the Chinese and the Swiss are endowed with a hardworking, reliable and innovative character.

He said Switzerland welcomes investment from Chinese businesses and will not impose restrictions. Switzerland is ready to enhance exchanges with China in winter sports, he added.

Maurer also said he is greatly in agreement with speeches delivered by Xi during the Second Belt and Road Forum for International Cooperation.

He described the Belt and Road as a grand and peaceful initiative, and credited the initiative for connecting countries from different regions, with different nationalities and cultures.

The BRI will provide a strong impetus for global economic growth and prosperity, he added.

Switzerland supports the BRI and commits to promoting the initiative in Europe, Maurer said.

He added that the country hopes to deepen bilateral cooperation in trade, investment and innovation with the initiative's framework.