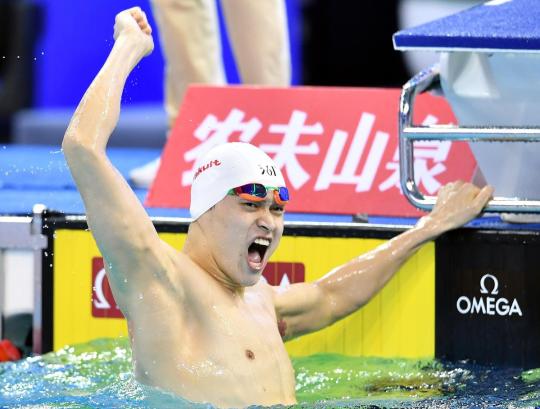 "I think my performance tonight give us some reason to believe that I can achieve some good results at the World Championships and the Olympic Games," said Sun, who also won the 200m in 1:46.12.

"It was not easy taking part in the two events within 40 minutes," he added. "But I did it. I think I also handled all the details very well. My starts and turns were good."

Sun was glad to be back in Guangzhou, as he had good memories here. In 2010 Asian Games in Guangzhou, Sun broke the Asian record to win the 1,500m freestyle.

"I am so happy to be back in Guangzhou," said Sun. "I broke the Asian record for the first time nine years ago in this venue."

"The audiences here are very supportive and they encouraged me. I will keep improving myself and I hope I can do my best at the 2020 Tokyo Games as well as the 2022 Hangzhou Asian Games." He added.

Since the 2010 Asian Games, Sun has always kept competitive in international competition.

"I am always strong because I am training hard," he said. "Like Hungary's Katinka Hosszu. She is older than me, and she is so competitive. You don't know how many efforts she paid in her training."