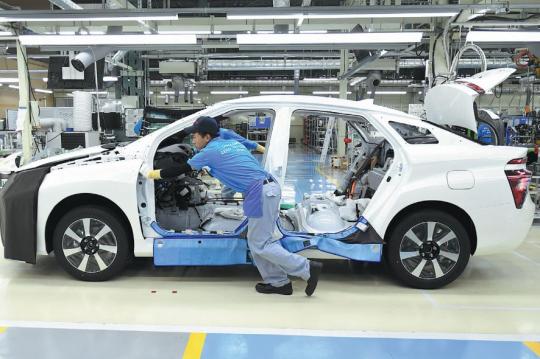 The future role of hydrogen fuel cells in China's fast-changing automotive industry was made clearer by the Ministry of Industry and Information Technology on Tuesday, with it detailing the government's latest development prospects for the technology.

His words were echoed by Yale Zhang, managing director of Shanghai-based consulting firm Automotive Foresight, who said that the large differences in costs in applying the different technologies across different applications is proving complementary rather than competitive.

The advantages of hydrogen fuel cells is that they produce zero emissions, enable longer distance driving and require little time to refuel.

However, safely storing hydrogen is a key technological challenge, as well as there being a lack of supporting infrastructure, laws and regulations.

Hydrogen lags far behind electric both in terms of infrastructure and commercialization.

"The Ministry of Industry and Information Technology will carry out demonstration runs of hydrogen fuel cell vehicles together with other departments, with the aim of promoting innovative development in China's hydrogen energy and fuel cell vehicle industries," Huang said.

His remarks are the latest made at State-level on the market prospects of hydrogen fuel cell vehicles, reafirming the government's intention to cooperate with bigname automakers on developing this segment of the market.

Japanese auto giant Toyota - one of the first automakers to develop hydrogen fuel cell vehicles - established a joint research institute with Tsinghua University on April 21, working on hydrogen fuel cell technology. The next day, on April 22, Toyota joined hands with Foton Motor Group and Beijing SinoHytec, a high-tech enterprise focusing on the R&D and industrialization of hydrogen fuel cell engines.

"BAIC Motor will step up the development of hydrogen products in commercial vehicles."

The collaboration between Toyota and Foton is expected by insiders to extend to a full range of models, including passenger cars, vans, and light and heavy trucks, providing a valuable foundation for next-generation commercial vehicles.

The model has a maximum driving range of 550 kilometers under the standard of the New European Driving Cycle, known as NEDC, and can be refueled from empty to full in five minutes.

Xu Qiuhua, general manager of SAIC Maxus, said as the ultimate solution to pollution caused by automobiles, hydrogen fuel cell vehicles will play a key role in the development direction of the automobile industry.

However, compared with Europe, North America, Japan and South Korea, who have already made substantial progress in developing hydrogen fuel cell vehicles, China still has a long way to go.

"Developing hydrogen fuel cell vehicles strongly relies on core technologies and supporting infrastructure, so it will take China at least 10 to 20 years to completely realize the industrialization and commercialization of hydrogen fuel cell automobiles," said Zhang from Automotive Foresight.