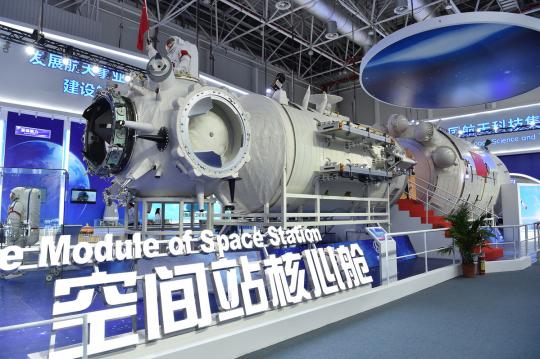 Completion expected by 2022; it will upport variety of science research

China's plan to involve international communities in its space missions to jointly conduct space research shows its determination to further enhance global cooperation in space projects, according to the director of the United Nations Office for Outer Space Affairs. That includes opening up its planned space station to other countries, especially developing countries.

China's space station, which is expected to be completed and operating by 2022, will be the world's first space station open for cooperation with all UN member states in manned space flights and exploration. The station will be able to support research on astronomy, space life sciences, biotechnology, microgravity fundamental physics and space materials science.

"Last year, we issued an announcement offering opportunities for all UN member states to propose experiments they want to conduct using China's space station," said Simonetta Di Pippo, director of the UNOOSA. "We have received more than 40 proposals before the deadline for submission. We will announce the winners probably by the end of June after evaluation." Di Pippo said these on the sidelines of the fourth China Space Day on April 24 to mark the anniversary of the country's first satellite launch in 1970.

Moreover, Pakistan intends to send one of their astronauts to China's space station by 2022, Amer Nadeem, chairman of Space and Upper Atmosphere Research Commission in Pakistan, said after the opening ceremony of China Space Day in Changsha, Hunan province, on Wednesday.

"Hopefully, the agreement on the matter will be signed very soon. We will select the candidates based on the agreement. Also, they will come to China for some parts of the training," Nadeem said. He added that Pakistan and China will further enhance cooperation on several space projects focusing on satellite networks in future.

Sixteen experiment racks will be installed in the core module, and two lab capsules of the space station and an extravehicular experiment platform will be built. Each rack is regarded as a lab that can support various space experiments, and astronauts can upgrade and replace the facilities. In addition, a capsule holding a large optical telescope will fly in the same orbit as the station, according to a report by Xinhua News Agency, quoting the Technology and Engineering Center for Space Utilization of the Chinese Academy of Sciences on Wednesday.

Di Pippo said opening up the space station to the world, especially to developing and emerging countries, is a good example of China's will to enhance international cooperation in space missions.

"Also, the UNOOSA just signed a framework agreement with China, allowing UN member states to participate in its scientific missions for the exploration of the solar system. It will bring scientists from all over the world to work together, which will bring a lot of innovation," she added.

The meteorological satellite jointly designed and constructed by Chinese and French scientists has already started to send back data on the wind and ocean waves after it was sent to orbit by a Chinese rocket in October. The data can help scientists learn more about climate change, said Lionel Suchet, chief operating officer of the National Centre for Space Studies of France.

"In 2021, France and China plan to jointly launch an astronomical satellite to help the world deepen its understanding on the gravitational wave," Suchet said. "Space is our future, we need to step into it together."