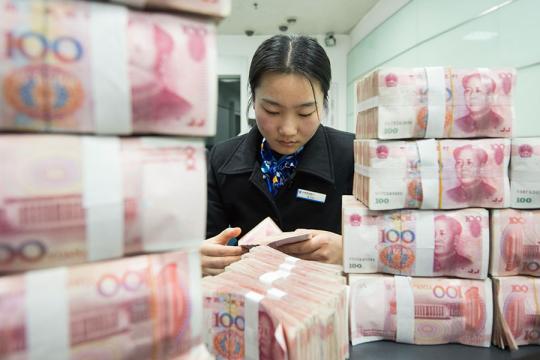 Don't interpret use of tools as change in stance, says PBOC vice-governor

China has no intention of tightening or relaxing its monetary policy, a central bank vice-governor said on Thursday. Analysts said such a stance is reasonable as the economy has stabilized in the first quarter.

"The central bank does not intend to tighten it, nor does it intend to loosen it," Liu Guoqiang, vice-governor of the People's Bank of China, told reporters at a news briefing.

The central bank's use of reverse repos and the medium-term lending facility (MLF) does not indicate a preference for either policy relaxation or tightening, Liu added.

Whether or not the central bank conducts reverse repos or MLFs on a given day does not mean there has been a shift in monetary policy, as those tools are aimed at adjusting short-term liquidity, he said.

China's GDP growth reached a higher-than-expected 6.4 percent year-on-year in the first quarter, unchanged from the fourth quarter of 2018, indicating that the world's second-largest economy has at least for now stabilized. Some analysts said there may be a tightening of monetary policy after there are signs of economic stabilization.

A statement from a meeting of the Political Bureau of the Communist Party of China Central Committee last Friday said that the economy had made a good start in the first quarter and the nation should adhere to the policy of preventing real estate speculation.

The statement has been interpreted by the market as a sign of the authorities scaling down policy sup-port for the economy, triggering investor concerns and stock market sell-off on recent trading days.

The Shanghai Composite Index slumped 2.4 percent at the close on Thursday. It has lost more than 4.5 percent this week.

"Concerns about a possible policy shift are hurting the market," said Zhang Gang, a Shanghai-based strategist with Central China Securities Co. "Investors can hardly find any sectors where they can make money, so they feel a strong urge to leave the market," he was quoted by Reuters as saying.

The central bank will face a tougher task of keeping a balance between maintaining ample liquidity and preventing monetary overflow, said Dong Yuping, an economist at the Institute of Finance and Banking of the Chinese Academy of Social Sciences. "It will require policymakers to be more accurate and balanced in policymaking," he said.