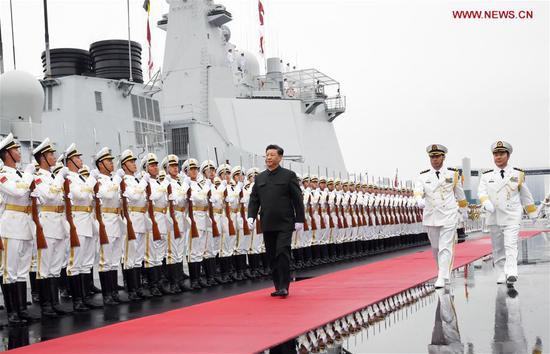 General Secretary of the Communist Party of China Central Committee, Chinese President and Central Military Commission Chairman Xi Jinping onboard the destroyer Xining gave an order to commence the naval parade on the sea off Qingdao at about 2:30 p.m. Tuesday.

A total of 32 vessels of the People's Liberation Army Navy sailed in six groups, and 39 warplanes of the navy flew in ten echelons.

The vessels whistled and officers and soldiers stood in a ceremonial formation, saluting Xi as they passed by.

"Salute to you, comrades," Xi called out to the officers and soldiers.

"Hail to you, chairman," they replied.

Xi alternated the greeting with "Comrades, thanks for your hard work," to which the officers and soldiers replied "Serve the people."