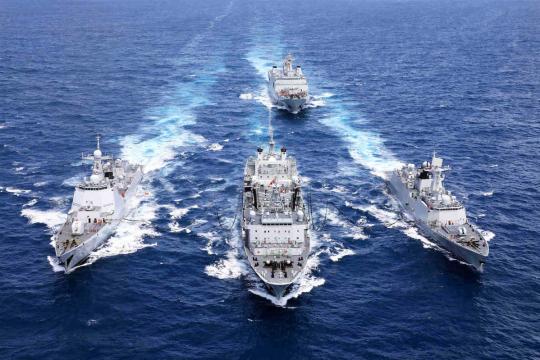 The People's Liberation Army Navy has made tremendous strides over the past few years in transforming itself into a world-class force under guidance and instructions from President Xi Jinping, according to top Navy commanders.

Long-range operations and live-fire exercises have become regular parts of the Navy's training, which is focused on combat readiness and capability, Vice-Admiral Shen Jinlong, the Navy's commander in chief, and Vice-Admiral Qin Shengxiang, Navy political commissar, said in a joint article published in the latest Qiushi Journal, a flagship magazine of the Communist Party of China Central Committee.

The commanders said combat exercises and joint operation drills have been given top priority on the Navy's agenda. The Navy's carrier battle group has gained initial fighting capability, and the transformation of the naval aviation force has been proceeding well, they said. The amphibious strike units have been substantially strengthened, and the overseas base is gradually establishing logistic support capacity.

The changes that the Navy has made and its accomplishments over the past few years are historic and remarkable, and the Navy has become stronger than ever, they said.

Behind these achievements have been guidance and instructions from Xi, who is also general secretary of the CPC Central Committee and chairman of the Central Military Commission. Xi "has pointed out that a strong nation must be one that cares about oceans, and that a modern, powerful navy is an important symbol of a top-tier military", the article said.

Xi's focus on the Navy can be traced to his first days as the Party's top leader in late 2012.

On Dec 8, 2012, less than a month after being elected top leader of the Party and the military, Xi boarded a destroyer that took him to the South China Sea. It was his first inspection of a PLA unit as chairman of the Central Military Commission. In the next nine months, Xi made at least two visits to Navy units, boarding new naval vessels such as a new-generation nuclear submarine and the aircraft carrier CNS Liaoning.

On May 24, 2017, Xi visited Navy headquarters in Beijing. He said the Navy should continue to speed up its transformation into a world-class force, ordering all Navy commanders to honor their mission of building a strong, modern navy.

The president said the Navy's development is strategically important and crucial to national interests and security. He instructed the Navy to focus on strengthening its combat capability and carrying out joint operations exercises in line with modern naval warfare. He also insisted that the Navy use systematic thinking in making development plans.

Innovation in science and technology must be used to inject momentum into the Navy's sustainable growth, he said during the inspection.

In the most recent naval parade in April 2018, Xi, while addressing over 10,000 Navy personnel from a combat ship in the parade, asked members of the service to uphold the Party's leadership, deepen military reform, enhance innovation in science and technology, develop new types of fighting forces, build modern naval warfare systems and improve the capability to undertake diversified military operations.

Two months later, during an inspection tour of the naval headquarters under the PLA Northern Theater Command in Qingdao, Shandong province, the president ordered the Navy to make full use of every minute to improve its combat readiness and focus on operational planning, training, hardware development and optimization of the chain of command.

He said it must strictly follow the requirements of the PLA's new-generation training guidelines, tighten the intensity of training, innovate training methods and conduct stringent inspections of training.

Navy units should carry out more large-scale tests of combat capability and enhance targeted and realistic training, he said.

Xi stressed that the Navy should take advantage of ongoing military reform to implement its transformation and beef up the construction of elite combat units. He asked the Navy to pay attention to building naval aviation forces.

The Navy said on Sunday that it will continue to adhere to the guidance and instructions from Xi. It pledged to accelerate its strategic transformation and maintain high standards of discipline among its members.