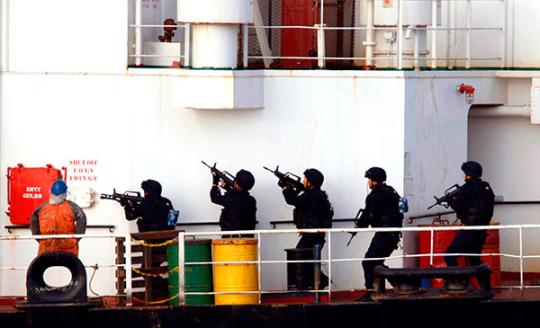 Members of the PLA Navy rescue a cargo ship from pirates on April 9, 2017 in the Gulf of Aden. (Niu Yunhai / China News Service)

A FORCE FOR PEACE

The PLA Navy was founded on April 23, 1949. To celebrate its 70th birthday, a host of multinational naval activities — including a joint sea parade, high-level symposiums and public tours of ships — are being held in Qingdao and nearby waters this week through Thursday.

The Navy will send a large armada consisting of 32 warships and 39 aircraft to take part in the joint naval parade on Tuesday, according to Vice-Admiral Qiu Yanpeng, deputy commander of the Navy.

Senior Captain Zhang Junshe, a researcher at the Naval Research Academy, said the Navy's willingness to display its latest ships to its counterparts at the parade shows that it has neither the intention to hide anything nor hostility toward anyone. Instead, it represents the Navy's aspiration to join hands with other navies to maintain world peace and stability, he said.

Qiu said the Navy always sticks to its peaceful development path and follows military policies that are defensive in nature, adding that the Navy will never pursue hegemony no matter how strong it becomes. "The Navy has never brought any war, turbulence or instability to any part of the world. We always understand, cherish and safeguard peace," he said.

The Navy has been active in providing security to the international community along with its growth, Qiu said.

Since 2008, the Navy has sent 32 escort fleets to the pirate-plagued Gulf of Aden and has provided protection to more than 6,600 Chinese and foreign vessels, he said.