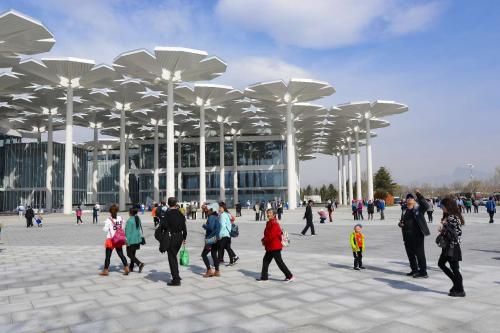 Cold fronts that can push temperatures down abruptly will be the main weather threat during the International Horticultural Exhibition 2019 in Beijing's Yanqing district, the city's meteorological service center said recently.

Han Chao, deputy director of the center's disaster reduction office, said that other weather risks during the expo - which will last 162 days from April to October - include snow, strong winds and fine dust.

Zhou Jianping, deputy head of the coordination bureau of the expo, told the China Meteorological Administration that its work will be taken seriously.

"Minor changes in weather indexes will influence the growth of garden plants. With so many species of plants with different growing seasons at the expo, an assortment of weather services should be provided," he said.

"Garden plants fear the late spring chill most, and since it is still cold at the end of April - according to records of previous weather patterns in Yanqing district - forecasts and arrangements should be made to help protect plants from harm."

The administration and local authorities have been preparing for more than three years to set up meteorological data monitoring systems, including a real-time plant temperature suitability index, drought and flood index, irrigation index and other forecast models, the administration said.

Zhang Jing, a staff member of the expo's meteorological pavilion, said that an observation station has been established and the data will appear in a timely manner on a bilingual weather website.

"The station is equipped with 11 sensors that can monitor more than 20 indexes such as negative ions in the air. The station will also use other advanced technologies, such as drones and phased-array radar, to monitor data," she said.

The Expo 2019 China Weather website gives weather indexes on an hourly basis and forecasts weather over the next seven days, the administration said.

In addition, an eco-meteorological pavilion will hold nine exhibitions that show the relationship between gardens, meteorology and people's daily lives.

"That will enhance the interactive experience and increase awareness of meteorological science and technological achievements," she said.

The exhibition has a theme of "live green, live better". According to its website, an estimated 16 million people will attend. So far, 110 countries and international organizations have confirmed their intent to participate.