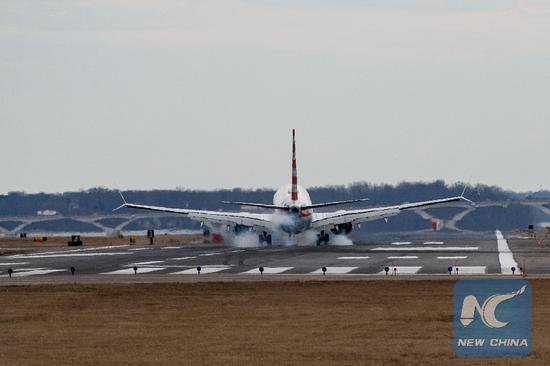 The European Commission published on Wednesday for public consultation a list of U.S. goods worth 20 billion U.S. dollars that it might target for additional tariffs, as counter measures against what Brussels says are American subsidies to Boeing.

There has been a decade-long fight in the World Trade Organization between Brussels and Washington over subsidies to Airbus and Boeing, the world's two leading large aircraft makers.

On March 28, the WTO's Appellate Body made a ruling regarding the European Union's complaint that the U.S. illegally subsidized Boeing.

Washington called the ruling at the time a "major win" for the United States, saying the ruling rejected "28 of 29 EU claims" and rejected "arguments by the EU that the U.S. federal and state programs gave more than 10 billion U.S. dollars in subsidies to Boeing large civil aircraft.

But the European Commission said "EU scores final victory in the WTO Boeing dispute", saying it vindicates "the EU's long held position that the United States has taken no steps to comply with WTO rules on support to Boeing."

The European Commission added at the time that "the ruling concludes definitively that the U.S. has continued to subsidise the company illegally despite previous rulings condemning this behaviour. This has caused significant harm to its European competitor Airbus."

At an earlier stage of this dispute in 2012, the EU made a request to the WTO to authorise the adoption of countermeasures against the estimated damage caused to Airbus by the U.S. support to Boeing.

"Based on this request, it is however for a WTO appointed arbitrator to determine the exact appropriate level of countermeasures. The EU is taking steps towards requesting the arbitrator to resume its work," the European Commission said on Wednesday.

The list published Wednesday serves as a benchmark as how the EU would retaliate against the U.S. subsidies to Boeing.

"A final list, based on the products included in today's list, will be drawn up by the EU taking into account the arbitrator's decision in the near future," the European Commission said.

The list published covers a range of items, that overall represent around 20 billion U.S. dollars of United States exports into the European Union, from aircraft to chemicals and notably agri-food products such as frozen fish, citrus fruits and ketchup.

On the other side of the Atlantic, Washington is requesting to impose approximately 11 billion U.S. dollars in annual countermeasures in response to what it says are the damaging trade effects of the EU subsidies to Airbus. A WTO arbitrator is currently evaluating the U.S request.

"Our ultimate goal is to reach an agreement with the EU to end all WTO-inconsistent subsidies to large civil aircraft. When the EU ends these harmful subsidies, the additional U.S. duties imposed in response can be lifted," U.S. Trade Representative Robert Lighthizer said in a statement on April 8.

Whether additional tariffs will actually come into effect remains to be seen, but Brussels is clearly seeking to resolve the issue through dialogue.

Brussels doesn't want a "tit-for-tat," the European Commissioner for trade Cecilia Malmstrom said in a Wednesday statement, "while we need to be ready with countermeasures in case there is no other way out, I still believe that dialogue is what should prevail between important partners such as the EU and the U.S., including in bringing an end to this long-standing dispute. The EU remains open for discussions with the U.S., provided these are without preconditions and aim at a fair outcome."

But the transatlantic trade ties have been under pressure for some time, especially since the Trump administration slapped tariffs on EU's metal exports in the name of national security, where Brussels hit back with tariffs of its own.

U.S. President Donald Trump also threatened the EU with fresh levies on cars made in the EU.