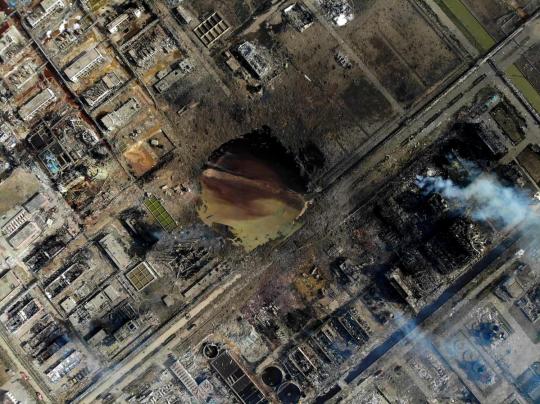 An aerial view of the Jiangsu Tianjiayi Chemical Co in Xiangshui county, Yancheng, Jiangsu province, after the explosion on March 21. [WANG JING/CHINA DAILY]

Special expert to be assigned, factories to be moved away from residential areas

Authorities said special experts will be designated to help govern the hazardous chemical industry in key areas, while ramping up efforts to move plants out of densely populated areas.

The move comes as an investigation into a deadly explosion at a chemical plant in Jiangsu province continues.

Counties listed as key ones for concentrations of chemical factories will be assigned at least two experts as special consultants to offer technical support to local authorities' supervision work, according to a guideline from the State Council's Work Safety Committee.

The document, published on Monday by the Ministry of Emergency Management, said the experts will be chosen based on each of the counties' needs and in light of possible differences in their major types of chemical plants.

It said the experts will also contribute to emergency rescue and safety training work. While assisting enterprises in their construction of safety infrastructure, they are also expected to help enhance grassroots law enforcement capabilities.

"The facilities and technologies in the hazardous chemical industry are complicated by their variety, and they also involve many flammable and combustible materials with huge potential safety hazards," the document said, adding that with the industry's rapid development, new facilities and technologies continue to emerge, making supervision work increasingly demanding.

It has been an increasing challenge that officers lack the expertise needed for proper supervision, which has been "a bottleneck that hinders further improvement of safe production", it said.

The document was made public as the probe into the deadly blast at a chemical plant continues in Xiangshui county of Yancheng, Jiangsu province.

On Monday, police detained another 17 people for their roles in the blast at Jiangsu Tianjiayi Chemical Co that claimed the lives of 78 and injured more than 600 on March 21.

The publicity department of Yancheng said the 17 people were from Tianjiayi and organizations suspected of providing fake evaluations of the company's operations.

So far 26 people have been criminally detained.

No conclusion has yet been made about the case, but multiple sources have suggested that the company's casual handling of its hazardous chemical waste could have contributed.

Local authorities will shut down the chemical industrial park where Tianjiayi is located.

Before the guideline's release, Wang Jiangping, vice-minister of industry and information technology, vowed to promote the relocation of hazardous chemical enterprises from densely populated areas by enhancing coordination in key areas and projects, according to a media release on Monday.

Wang made the comment during a conference of a special work group for the relocation work on Friday. The group has members from various central government bodies.

Wang, who is also head of the group, said his team will make efforts to promote local governments' awareness of the urgency of the relocations and intensify safety and environmental monitoring as the work moves forward.

According to a circular released by the General Office of the State Council in September 2017, China plans to correct, move or shut down all hazardous chemical enterprises located too close to residential areas by the end of 2025.

The minimum distance for different types of hazardous chemicals from residential areas vary in China's national standard, but many are set beyond 500 meters.

The country's top environmental watchdog has also pledged to enhance its management over chemicals.

Qiu Qiwen, head of solid waste and chemicals management at the Ministry of Ecology and Environment, said during a news conference late in March that the ministry would promote the draft of a special law or regulation regarding the assessment and control of environmental risks posed by chemicals.