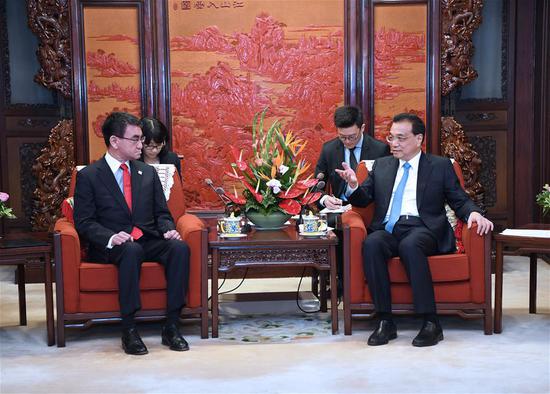 Chinese Premier Li Keqiang meets with Japanese Foreign Minister Taro Kono and some other cabinet ministers who are here to attend the fifth high-level economic dialogue between China and Japan in Beijing, capital of China, April 15, 2019. (Xinhua/Rao Aimin)

Chinese Premier Li Keqiang Monday met with Japanese Foreign Minister Taro Kono and some other cabinet ministers who were here to attend the fifth high-level economic dialogue between China and Japan.

Li said China and Japan are important neighbors. Since last year, through joint efforts, bilateral relations have returned to the right track and achieved new development. On the basis of the principles enshrined in the four China-Japan political documents, the two sides should promote the long-term, healthy and stable development of bilateral relations in the spirit of taking history as a mirror and looking into the future.

He said since China and Japan are two of the world's major economies, strengthening cooperation is not only in the interests of the two countries but also conducive to peace, stability and prosperity in the region and world.

As both sides support free trade and abide by the rules of the World Trade Organization, they should work together to create a fair, equitable and non-discriminatory business environment for each other's companies, said Li.

The Chinese side will unswervingly deepen reforms and expand opening up, and welcome Japanese companies to expand investment in China, Li added.

The premier said China stands ready to work with Japan and other relevant parties to promote the negotiation of the China-Japan-Republic of Korea free trade agreement and the Regional Comprehensive Economic Partnership (RCEP) to create more opportunities for regional countries.

China supports Japan in hosting the G20 Okasa Summit this year, Li said, adding that China is willing to jointly promote the reform of global economic governance to inject new impetus into the world economy.

Japan is willing to enhance cooperation with China in areas such as innovation, finance, environmental protection, hydrogen-energy, tourism, youth, smart city and the third-party market, deepen coordination in multi-lateral areas and promote the RCEP negotiation to achieve new progress this year.