Han ready to embark on her WNBA journey 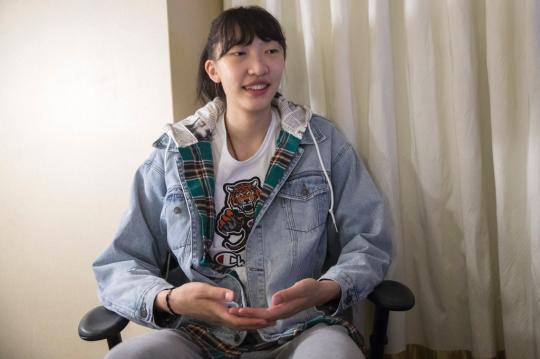 Han Xu, a 19-year-old center for China's national team, has realized her dream of being drafted by the WNBA, the world's premier women's professional basketball league.

After being selected by the New York Liberty in last week's WNBA draft, the 6-foot-9 Han said: "I had a dream of playing on better-to-best platforms when I started basketball training 10 years ago.

"I began to pay close attention to the WNBA when I was in high school, but I buried my dream in the bottom of my heart because the future was so uncertain at that time.

"But after I played for the Chinese junior and senior national teams, I felt the chance approaching."

Han contributed a team-high 20 points in China's 100-88 loss to Team USA in the group stage of the 2018 World Cup in Spain, and her superb shooting and playmaking impressed the Americans.

Recalling that game, Han said: "That was a game I played under the least pressure. Facing such strong opponents, I had nothing to fear and totally concentrated on the game. My teammates also played well, such as Sun Mengran, who collected 16 points."

Han started her basketball training at a sports school in her hometown. Then she studied at the well-known middle school attached to Tsinghua University in Beijing, which is also a secondary school with basketball culture.

"In the six-year period of middle school, I took curricular courses every morning and afternoon, followed by basketball drills. Such a schedule required proper time management and role switching," she said.

"My school had professional basketball coaches and the basketball-oriented students including me had many chances to take part in competitions, even international ones."

Han was named to the WCBA All-Star starting lineup and went to the World Cup with the national team before heading to the US for the WNBA draft.

"During my stay in Los Angeles this year in preparation for the draft, the coach of New York Liberty came to watch me train," she said.

"I could feel the hospitality of WNBA. The most important thing is I've come to WNBA and I'll try my best."

The Liberty finished 11th in the 12-team WNBA last season with a franchise-worst 7-27 record.

Talking about her future life in New York, Han said: "I like taking pictures on tours, but I don't think I will have enough time for much of that. So far, I'm focusing on learning English. Since I played in the WCBA last year, I've been learning English with some tutors."

Han was the second pick in the second round of the WNBA draft, 14th overall.

Afterwards she said in English: "I am very excited as my dream is coming true."