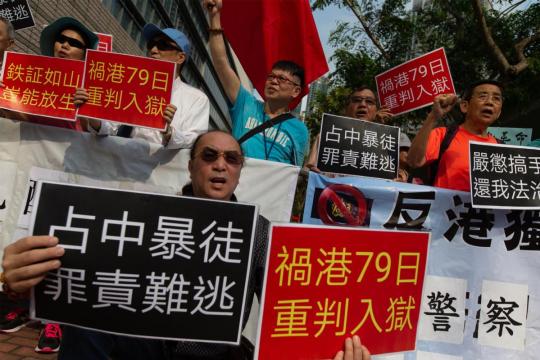 Civil disobedience is not a viable justification for engaging in criminal activity, a judge in the West Kowloon district of Hong Kong said on Tuesday as he handed down verdicts for leading figures in the 2014"Occupy Central" movement.

Nine participants, including three chief organizers, were all found guilty of causing a public nuisance in the 79-day sit-in, which brought the city's downtown area to a standstill at the time.

Each of their charges is punishable by up to seven years in prison, according to Hong Kong's Crimes Ordinance and the Criminal Procedure Ordinance. The sentences will be announced at a later date.

Civil disobedience is commonly defined as a form of nonviolent protest against government policy. In 2014, the massive protest, in which hundreds of thousands of people participated, began in opposition to the then official reform plan of the coming chief executive election.

In the written verdict, Judge Johnny Chan Jong-herng said the trio conspired to cause a public nuisance through "unreasonable and unlawful" obstruction of public roads in a central business district in the special administrative region over a prolonged period.

The judge said he had balanced citizens' rights of free speech, assembly, demonstration, and other relevant rights protected by the Basic Law, the SAR's constitutional document.

It's not necessary to block a major road, and the obstruction interfered with rights enjoyed by people who didn't participate in the protest, he noted.

If sentenced to one month or more, Tanya Chan and Shiu may lose their seats in the Legislative Council if a motion to relieve them of their duties is passed by two-thirds of Leg-Co members present at the vote, under Article 79 of the Basic Law.

Their rights to run for a LegCo election in the next five years will also be denied if the penalty is more than three months of imprisonment, according to LegCo.

Legal experts said the ruling draws a red line for political expression and action in the future.

Ronny Tong Ka-wah, a lawyer and member of the Executive Council-the top advisory body for the chief executive in Hong Kong, said the "Occupy Central" movement disturbed a considerable number of Hong Kong people's lives, and the convictions will impose restraints on future political expression and actions.

Lau Siu-kai, vice-president of the Chinese Association of Hong Kong and Macao Studies, said the city's stability is now a common expectation among most Hong Kong residents.