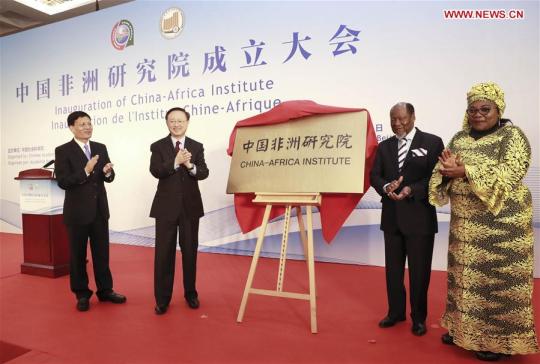 The inauguration ceremony of the China-Africa Institute is held in Beijing, April 9, 2019. (Photo/Xinhua)

China and Africa's joint efforts to boost their traditional friendship, enhance exchanges and cooperation, and promote mutual learning among cultures will not only benefit their own populations, but also help contribute to world peace and development, President Xi Jinping said on Tuesday.

Xi made the remark in a congratulatory letter sent to the meeting held in Beijing on Tuesday for the inauguration of the China-Africa Institute, a think tank organized by the Chinese Academy of Social Sciences.

Saying the world today is facing profound changes unseen in a century, Xi called on the two sides to further deepen their ties amid the current global situation.

Xi recalled the Beijing Summit of the Forum on China-Africa Cooperation held in September, when the two sides committed to building a stronger China-Africa community with a shared future.

Saying the establishment of the Beijing-based institute is an important move to increase cultural and people-to-people exchanges as part of the eight major initiatives, Xi expressed the hope that it will draw on academic resources from China and Africa to provide more advice for China-Africa cooperation, as well as their cooperation with other parties.

The institute is also expected to help enhance mutual understanding and friendship between Chinese and African peoples, and contribute to the further development of Sino-African ties as well as the building of a community with a shared future for mankind, he added.

Speaking at the meeting attended by around 350 Chinese and African government officials, academicians and scholars, Yang Jiechi, a member of the Political Bureau of the Central Committee of the Communist Party of China and director of the Office of the Central Commission for Foreign Affairs, said Xi's message demonstrates the support of the Chinese president and the Chinese government in developing ties with Africa.

The two sides have been committed to developing exchanges in governance and development experiences and are jointly exploring the new modes for mutually beneficial cooperation, Yang said.

In another development, a book of Xi's discourses on promoting the building of a community with a shared future for mankind has been published in English by Central Compilation and Translation Press. It includes 85 writings on the subject by Xi.