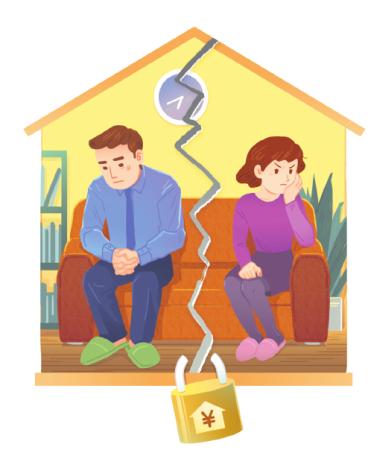 In China's big cities today, a man and a woman living under the same roof may be one of several things: husband and wife; early-adult siblings, a spouse and an in-law; or, increasingly, former spouses.

Yuan and his former wife Lu, who are both 32 and live in Shanghai, are in exactly this situation (to ensure privacy, these are not their real names).

The college sweethearts, both natives of neighboring Jiangsu province, tied the knot five years ago. In October, they divorced, but chose to continue living together because of the difficulty of splitting their apartment in Changning district, which is estimated to be worth about 8 million yuan ($1.2 million).

"Neither of us can afford to buy the other's half, and neither of us is willing to move out and rent a small, shabby or distant apartment, which would compromise the quality of life," Yuan said.

He added that he could not identify the exact reason the marriage failed. "She said that I was not attentive enough to her. Maybe I spent too much time on sports and friends?"

Relationship counselors and divorce attorneys said that since 2016 many former couples-usually people ages 30 to 40-have been forced to continue living together because residential property prices had been soaring for years in big cities such as Beijing, Shanghai, Guangzhou and Shenzhen, the latter two in Guangdong province.

"Some people thought housing prices were undergoing a slight drop and were waiting for the next round of price surges, while others could not agree on how much to ask for their apartment. Such factors ended up with them continuing to live together," said Shu Xin, director of the Weiqing Group, a relationship counseling agency in Shanghai that has been operating for 18 years.

Statistics released by the Ministry of Civil Affairs in August show that more than 4.3 million married couples divorced in 2017, and the divorce rate has been rising steadily for many years.

"Just like divorce, the decline in the marriage rate is closely related to the rising cost of getting married, especially the staggeringly high house prices in some big cities," said Li Jianmin, a professor of demographics at the Institute of Population and Development at Nankai University in Tianjin.

"Both marriage and divorce have become economic as much as social issues."

Residential property prices did not stop rocketing in major cities until late 2016, when the central and local governments rolled out a raft of measures, including restrictions on purchases and higher minimum mortgage down payments, to cool the market.

"Today, house prices in districts within Shanghai's Middle Ring Road remain at the same high level as during the latter half of 2016. We are both working hard, accumulating savings to hopefully pay half of the house price to the other someday," Yuan said.