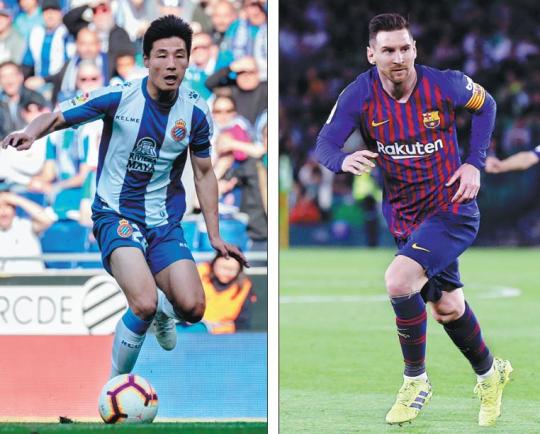 China international Wu Lei of Espanyol will carry the hopes of the nation when he faces Barcelona's Lionel Messi in the Catalan derby on Saturday night at Camp Nou. （XINHUA）

Wu Lei hysteria is about hit fever pitch, with the Chinese forward poised for the biggest and most illustrious test of his burgeoning La Liga career to date this weekend - and Lionel Messi should be wary.

Millions of fans will be glued to TVs, laptops and cellphones back home as Wu's Espanyol travels crosstown to Camp Nou to take on the might of Messi's Barcelona in the Catalan derby on Saturday.

After a storming start to his career in Spain, expectations are high Wu can continue to do the nation proud against the five-time European champion.

"A derby is different from other matches. I'm quite sure this match means a lot more to players and fans," said Wu.

"Barcelona is a strong rival but we have extra desire to win the match. We don't need any push or motivation. We can lose any match, but we must try our best to win the derby."

Wu has already hit the net once for his new club, which he joined from Shanghai SIPG in January to become the first Chinese to sign permanently with a La Liga team.

It's the 27-year-old's overall contribution in attack, however, that has had fans, pundits and Espanyol coach Rubi applauding.

Wu has supplied two assists and also won a penalty in a victory over Rayo Vallecano to help Espanyol climb away from the relegation zone. It now sits in 13th position, nine points from trouble.

Adding to its points tally against league-leading Barca at Camp Nou, however, would seem beyond the Blanquiazules (White and Blues). as Barca routinely dominates its local rival - the latest rout, 4-0, coming in December at RCDE Stadium where Messi bagged a brace.

The Argentine has been back to his beguiling best this season and leads La Liga's scoring chart with 29 goals.

The chance for China's best player to go head to head against arguably the world's best is a mouthwatering prospect for Chinese fans, with TV ratings expected to skyrocket despite the match kicking off at 11:15 pm in China.

China's La Liga rights holder PPTV has this week been busy delivering a blow-by-blow account of Wu's preparations for the derby, hyping the game with the slogan: "Keep calm and watch Messi/Wu Lei."

In addition, La Liga is staging a special live broadcast from Shanghai on the night, an initiative backed by both clubs.

"I think La Liga is the best league in the world, and I'm honored to have the chance here. It is also beneficial to my career," said Wu.

"Since my arrival, there is more exposure of the league and my team to Chinese fans. All of this will further help lift China's soccer level."

Espanyol is doing its utmost "to harness the interest in their Chinese player", as the club's website reads, with a Wu Lei scarf the latest item of merchandise on sale in the striker's honor.

Meanwhile, Espanyol directors have flown to China to meet the club's billionaire owner, Chen Yansheng, to discuss plans for next season.

The visit will double as a talent-scouting mission, with Espanyol representatives to visit Sangao Soccer School, which already has a strategic development agreement with the club.

Espanyol also plans to open another academy in Shandong province in the hope of finding the next Wu.

If he somehow manages to hit the net against Barca, it's safe to say soccer schools all over the country will reap the benefits.

Xinhua contributed to this story