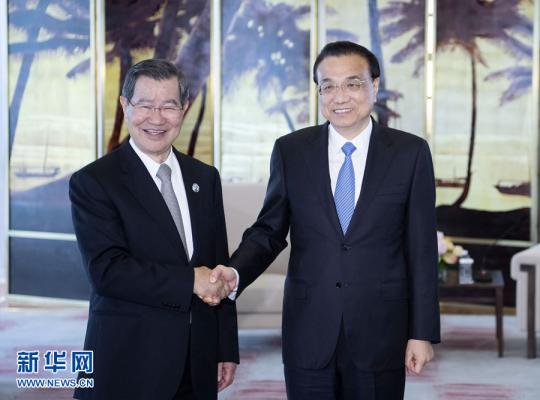 Premier pledges supportive measures for Taiwan businesses on the mainland

Premier Li Keqiang has called for adherence to the one-China policy and the 1992 Consensus, while pledging more supportive measures for Taiwan businesses to invest on the Chinese mainland.

Li made the remark when meeting with Vincent Siew, honorary chairman of the Taiwan-based Cross-Straits Common Market Foundation, and other guests from Taiwan on Wednesday during the Boao Forum for Asia in Hainan province.

The premier also urged promoting peaceful development of cross-Straits relations and peaceful unification of the motherland, which is in line with the welfare of people on the Chinese mainland and Taiwan.

Entrepreneurs and investors from Taiwan have made great contributions to the mainland's economic development, and they are welcome to continue investing on the mainland, Li said.

The existing preferential policies for Taiwan businesses will remain unchanged and their legitimate rights will be protected, Li said. In the meantime, new measures will be taken to benefit people from Taiwan, he said.

The mainland is willing to expand imports of agricultural and fishery products from the island, and offer more convenience and favorable policies, Li said.

The mainland will do its utmost to do whatever is beneficial to Taiwan compatriots, the premier added.

Siew said people on both sides of the Taiwan Straits should work together and help each other. He said his foundation is willing to work with the mainland to build a better common market and promote integration, which is expected to lay a firm foundation for consolidating peaceful development of cross-Straits relations, he said.

Late on Thursday, Liu Jieyi, head of the Taiwan Affairs Office of the State Council, also met with Siew.