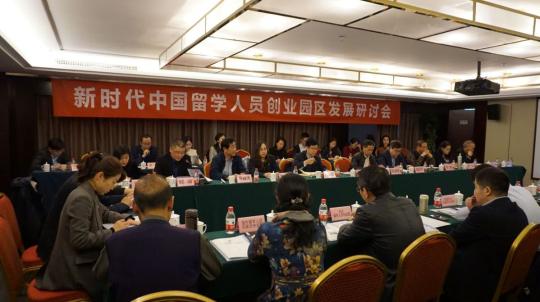 Innovative startups have taken the lead in cutting-edge technologies in China, said Xu Heping, former director of the Office of Policy Study under the General Office of the Ministry of Science and Technology.

He made the remarks Friday during a seminar held by the China Overseas Talent Pioneer Park Alliance. The event focused the development of the alliance as well as its member pioneer parks, which house businesses.

Highlighting the Beijing-based space startup Commsat and Shenzhen-based commercial drone-maker DJI, Xu made innovation the cornerstone of his speech.

Many newly established enterprises, rather than prestigious institutions or companies, can lead the development of their industries, which is significant for the development of pioneer parks and the industrial application of scientific and technological achievements, Xu added.

China has seen turning points in industries like energy, service, agriculture and manufacturing, leading to the reconstruction of the industrial landscape and competition model, he said. For the development of pioneer parks, it is necessary to develop first-mover advantages, gather innovative resources and build industrial clusters, said Xu.

"The research and development, as well as the application of many cutting-edge technologies, or even the construction of pioneer parks, requires the support of capital."

Pioneer parks should be more aware of the role of capital in innovation, and deploy capital to technologies and teams with the potential to lead industries, said Fang.

Experts and representatives from pioneer parks across the country at the seminar also summed up their experiences over 25 years of development, to better help overseas students start their businesses in China.

At present, China has more than 10,000 national business incubators and shared work spaces for about 210,000 startups, creating more than 2 million jobs, according to Chen Qing, chief of the Technology Business Incubators Administrative Office under the Torch High Technology Industry Development Center of the Ministry of Science and Technology.