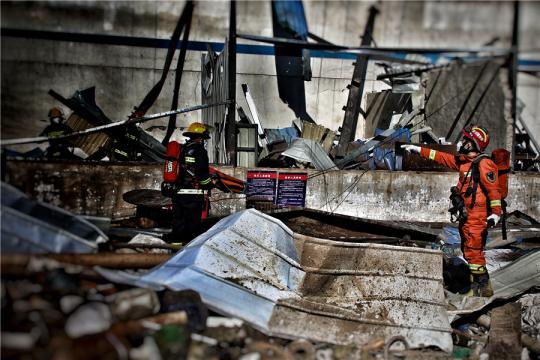 The victims and families affected by the chemical explosion last week in Jiangsu province, have been provided with legal aid as they seek compensation, as well as with psychological counseling for mental recovery, according to the rescue headquarters established after the blast.

The deadly explosion occurred on Thursday following a fire that broke out in a plant owned by Jiangsu Tianjiayi Chemical Co in an industrial park in Yancheng's Xiangshui county.

The death toll on Tuesday stood at 78. Fifty-six bodies had been identified as of Monday, with 22 others unknown. After DNA tests, 25 of the 28 people previously reported to be missing were confirmed dead.

According to the Yancheng Department of Justice, a legal assistance team including more than 120 lawyers has been formed to help the damaged enterprises and the victims and their families.

The team has eight groups, including specialists in insurance claims, property damage and labor disputes.

The Jiangsu Lawyers Association also sent attorneys with emergency response experience to Yancheng to train members of the team on legal issues.

Workers have been sent to assess property losses, and people affected will be fully compensated, according to the rescue headquarters.

Relatives and friends of the missing continue to wait at the police station in Chenjiagang township. Some have been seen weeping after police confirmed that a loved one was dead.

Li Hui, 32, received the sad news from a policewoman that his great-uncle, Li Changhai, had died in the explosion. Li, who drove more than 10 hours from Yiwu, Zhejiang, said nothing could compensate for the family's loss.

"Though in his 50s, my great-uncle had to leave his hometown in Anhui province to make money. The family was in debt after buying apartments for the two sons so they could marry. We just want to claim the body and bury him in peace."

According to the rescue headquarters, psychologists have been sent to comfort all the families of deceased victims.

Some families have reached agreements on compensation with the local government, it said.

According to the provincial Department of Ecology and Environment, environmental protection workers from six cities, together with 11 experts from the department, are in Xiangshui to monitor the air, soil and water.

It said that the dams on three rivers had been blocked on the night of the blast to prevent polluted water from running south. Some substances in two of the rivers, including chemical oxygen demand and ammonia nitrogen, still exceed environmental standards.

The chemical park has issued a notice that the government will take responsibility for repairing all the damaged houses. Those who repair houses by themselves will be compensated in cash.

It said a third-party organization will identify damage to the houses and a three-month transitional rent subsidy would be provided to those who make requests.