Exchanges with Taiwan will benefit 'one family' 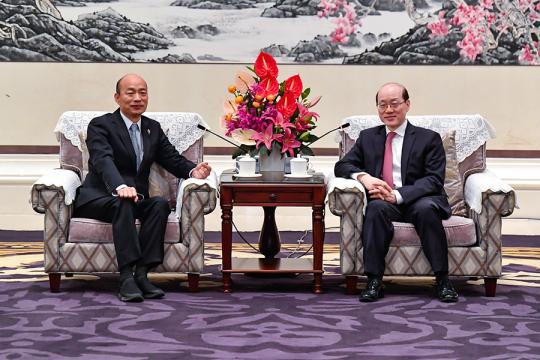 In meeting with mayor of Kaohsiung, mainland official calls for integration

The Chinese mainland will continue to deepen the integrated development across the Taiwan Straits and share development opportunities with Taiwan residents, said Liu Jieyi, head of the State Council Taiwan Affairs Office, when he met the mayor of Kaohsiung, Han Kuo-yu, in Shenzhen, Guangdong province, on Monday.

"Compatriots on both sides of the Taiwan Straits are one family. We welcome and support the exchanges between cities on the two sides to increase people's sense of gain, on the basis of adhering to the 1992 Consensus and the one-China principle," he said.

The meeting was held during Han's stay in Shenzhen during his weeklong tour, which began on Friday and so far has included visits to Hong Kong and Macao to boost economic cooperation. He is also scheduled to visit Xiamen, Fujian province.

"People of the two sides should resolutely oppose Taiwan independence and work together to move cross-Straits relations in the right direction," Liu said.

In response, Han, the mayor, said: "The 1992 Consensus is the anchor of cross-Straits relations, and I hope more practical cooperation in the economy, trade and other areas will be carried out to truly improve people's well-being."

Before the meeting on Monday, Han paid a visit to a center for business startups from Taiwan, a mainland technology company and an agricultural products market in Shenzhen, where he signed a contract to sell Kaohsiung fruit, including lily pads and pineapple.

Over the weekend, trade deals worth more than NT$3.1 billion ($100 million) were signed in Hong Kong and Macao, the first stops on the mayor's journey.

Han set foot in Shenzhen on Sunday afternoon, his first stop on the mainland. He will move on to Xiamen and end his trip on Thursday.

The tour is the first across the Straits by the mayor since he assumed office in December. He gained popularity in his election campaign in November with his slogan, "Goods go out, people come in, and Kaohsiung makes a fortune."

Tang Yonghong, deputy director of the Taiwan Research Center at Xiamen University, said trade will help expand exchanges between Kaohsiung and cities on the mainland, and in turn contribute to its economic development.

More important, it will help enhance mutual understanding through exchanges and establish cooperation mechanisms, which will facilitate future exchanges, he added.

Unlike Han's cooperation with mainland cities to boost the city's economy, Taiwan leader Tsai Ing-wen's policy is turning its back on improving people's livelihoods, Tang said.

To make Taiwan less dependent on the mainland, Tsai has carried out her so-called New Southbound Policy since she came to power in 2016, Tang said. It was designed to enhance cooperation between the island and countries in Southeast Asia, South Asia and Oceania.

"Tsai has been spending taxpayer money to push forward the cooperation," he said. "But it doesn't help to improve the island's economy and people's lives."

Tang said that Taiwan is a small economy that must integrate and make use of outside resources and markets for development.

"However, competition is more than complementary between Taiwan's market and those of countries in Southeast and South Asia. Also, the market purchasing power in those countries is not high," he said.

"The mainland is a major center of economic globalization, and Taiwan's largest trade partner. In this context, it is self-evident that Taiwan's future lies in the mainland market."