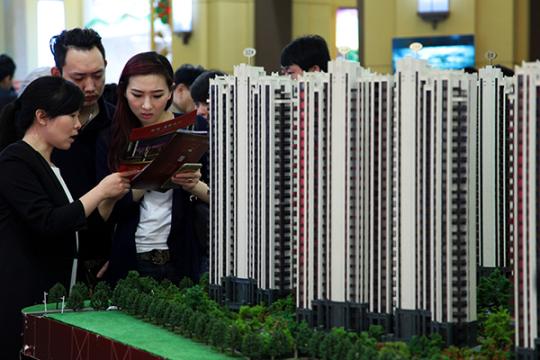 Prospective homebuyers at a realty expo in Shanghai. (Photo/China Daily)

But a series of conditions is required to levy real estate tax. Maybe that's why the tax is not on the legislation agenda this year.

First, the legislation planning issued by the Standing Committee of the National People's Congress in September 2018 listed legislation on real estate tax as the first batch of draft laws mature enough to be submitted for review. But before being submitted to the NPC Standing Committee for review, the important issues of the draft have to be thrashed out by, among other things, soliciting internal opinions.

The central authorities' position on real estate tax shows it focuses more on the legal principle of real estate legislation, and giving full authorization to local governments to levy and collect such a tax. Which would enable local governments to choose the specific time, tax rate and tax collection methods according to the actual local situations.

Second, corresponding reforms, too, are required for a smooth implementation of a real estate tax in the future. At the hardware level, the Ministry of Natural Resources announced in June 2018 that a unified immovable property registration information management platform has been built, which would facilitate network connectivity nationwide. In other words, the real estate registration system has officially started operation.

Moreover, real estate tax, including housing property tax, contract tax and urban land usage tax, should be further amended. All these technological problems are not difficult to solve, and the related authorities have already devised a relatively mature plan to deal with them.

President Xi Jinping recently said that we should prudently implement a long-term mechanism to enable the steady and healthy development of the real estate market, for which a real estate tax is indispensable.

When the draft real estate tax law will be reviewed and when it will be introduced are macroeconomic issues that depend on China's overall macroeconomic situation. But in the Government Work Report, Premier Li said that the stability and resilience of China's macroeconomic operation have remarkably improved, and the strict regulation of real estate market has helped cool down the overheated property market.

Also, the local authorities which have different regulations and interests are expected to decide when and how to levy real estate tax.

The author is a researcher at the Institute for Urban and Environmental Studies, Chinese Academy of Social Sciences. The views don't necessarily represent those of China Daily.