Li: Foreign companies to be equals 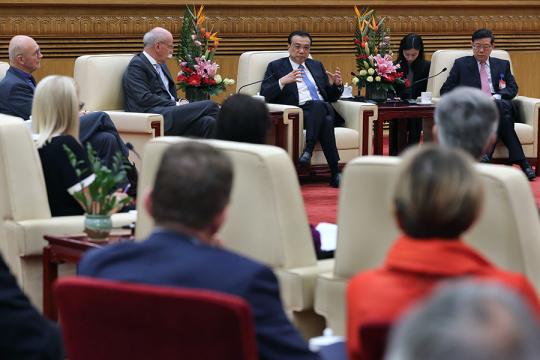 Premier Li Keqiang speaks on Monday with representatives of Fortune 500 companies, leading research institutions and international organizations who were in Beijing to attend the China Development Forum 2019. (Photo/China Daily by Wu Zhiyi)

His remarks were made to about 100 overseas representatives of Fortune 500 companies, leading research institutions and international organizations who were in Beijing to attend the China Development Forum 2019.

Li reaffirmed that China will only become more open to the world and will continue to adopt concrete measures to protect the rights of foreign investors, based on the requirements of further opening-up and reactions from foreign businesses.

China remains the world's largest developing country, and it owes its tremendous achievements over the past 40 years to reform and opening-up, he said.

The country will step up the protection of intellectual property rights across the board and refine its punitive compensation mechanism for infringements, he said.

He added that China will never allow the forced transfer of technology and that it will resolutely punish different types of IPR violations to create a business environment based on the rule of law that is internationalized and enabling.

He noted that the adoption of the Foreign Investment Law by the National People's Congress earlier this month was part of the country's effort to protect foreign investment through legal measures.

The world is facing a new industrial and technological revolution, and the only viable choice is to embrace it, not reject it, he said.

The Chinese government has always adopted regulations that are accommodating and prudent toward innovation, rather than curbing them, and it encourages the development of new technologies and new business types and will create an enabling environment for innovation, he said.

Li also noted that the Chinese economy has achieved generally stable growth while making progress over the past year.

Faced with new downward pressure, the country will continue to focus its efforts on the reduction of taxes and fees, while fostering new growth engines, he said.

Rather than relying on raising deficits or easing monetary policy, the Chinese government will seek to further stimulate the vitality of the market and to power growth through more reform and opening-up, he said.

Dieter Zetsche, chairman of the board of management of Daimler AG and head of Mercedes-Benz Cars, said the foreign delegates to the forum have gained many new exciting insights, ranging from the planned measures, structural reform and fiscal reform to reforms in the manufacturing policy and financial sector through the China Development Forum.

"All of this further strengthened our confidence in this great market," said Zetsche, who is also co-chair of the forum.