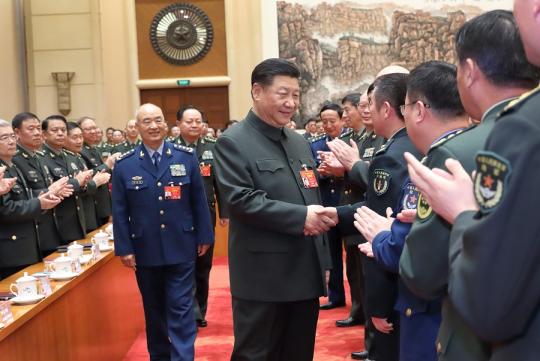 President Xi Jinping, also general secretary of the Communist Party of China Central Committee and chairman of the Central Military Commission, attends a plenary meeting on Tuesday of the delegation of the People's Liberation Army and the People's Armed Police Force to the second session of the 13th National People's Congress in Beijing. (Photo/Xinhua)

President Xi Jinping urged the military on Tuesday to make all-out efforts to ensure its goals for 2020 are fully realized in a timely manner.

Xi, also general secretary of the Communist Party of China Central Committee and chairman of the Central Military Commission, told national legislators from the People's Liberation Army and the People's Armed Police Force that this year is crucial to fulfilling the armed forces' 13th five-year development plan, from 2016 to 2020.

He asked all military personnel to understand the significance and urgency of the plan's realization and spare no effort to turn its goals into reality.

Xi ordered the military to focus on improving its combat readiness and capability. It should also deepen its reform, foster innovation and present new achievements for the coming 70th birthday of the People's Republic of China in October, he added.

He said that to achieve the 2020 goals, the military must strengthen planning and coordination, concentrate resources on its priorities and enhance its accountability system.

More attention should be given to projects that concern the military's combat readiness efforts, and those key to boosting the armed forces' operational capability or to facilitating reforms in national defense. The military should gear up such projects and make sure they are of high quality, according to Xi.

Policies pertaining to military buildup and troop management should be refined to lay a solid foundation for the realization of the goals.

Xi ordered the military to intensify its internal supervision and inspection to prevent and uproot the practice of formalities for formalities' sake and bureaucratism. Funds should be used where they are truly needed, and the virtues of hard work and thrift should be promoted. Management and scrutiny over the use of funds should be strengthened to eliminate misconduct and corruption, he said.

He stressed that the armed forces' 14th five-year development plan should fit with national strategies in development, security and the military, and should integrate their current and future needs to pursue sustainable, consistent growth.

Xi insisted on the military understanding the determination and intention of the Party's leadership, exerting itself to enhance combat preparedness and firmly safeguarding China's sovereignty, safety, development interests, and social stability.

He also instructed the military to support the country's economic and social development, environmental endeavors and disaster and accident relief work. It should also play its part in poverty alleviation, he added.