Farewell to GDP as only performance indicator 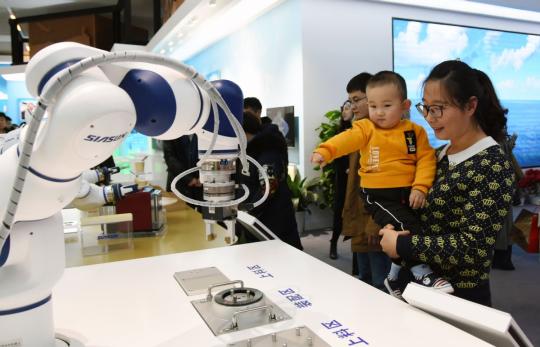 Visitors look at a robot used to assemble various mechanical parts at an industrial expo in Beijing. (Photo/Xinhua)

The National Bureau of Statistics will centralize the checking and computation of the gross domestic product of provincial-level regions this year, and halt the conventional practice of ranking the regions in terms of GDP size and GDP growth rate. Beijing News comments:

The bureau unveiled a reform plan for the move in 2017, and started checking and calculating the GDP of Shaanxi, Zhejiang and Hubei provinces in 2018 as a pilot project to prepare for popularizing the practice nationwide.

Experience shows that it has not been uncommon for local governments to doctor their statistics in a bid to beautify their GDP reports to the central authority.

If the reform is carried out as planned this year, it will be the first time that the central authority has directly grasped the brass tacks of crucial economic statistics of provinces and regions, which will make the computation of their GDP more accurate and reliable for policymaking.

That the bureau will not rank the provinces according to the size and growth speed of their GDP is also significant as it shows that the central authority has switched its attention from the speed of economic growth to the quality.

Despite this, the provinces will presumably still calculate and rank their GDP themselves. The rankings not only let the provincial governments know their position and weight in China's economic map, but also serve as an important incentive for them to compete with each other.

But times have changed, as China has come to such a development phase that one-sided emphasis on the size of GDP cannot reflect the comprehensive conditions of the economy anymore.

In fact, the GDP contest among local governments, particularly at the city level, has evolved into a blind competition for statistical growth, irrespective of the environmental effects in the long run.

Thus it is necessary for the central authority to take the lead in bringing this practice to a halt. But China still lacks a system that reflects the fitness and sustainability of local economies and which can also serve as a measure with which to judge the performance of local officials.

Before that system is established, the local governments will continue to believe that the GDP figure remains an indispensable means to evaluate their performance. There will be a long way to go before the GDP rankings are consigned to the past.