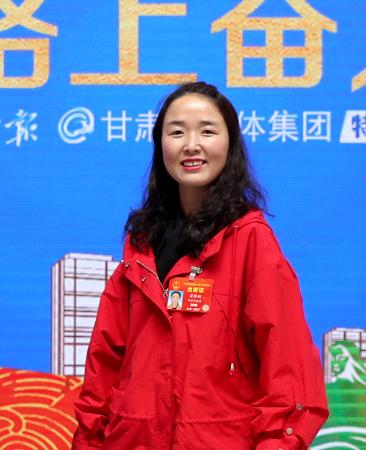 Born in a village in Longnan, Gansu province, the 32-year-old dropped out of the education system after finishing middle school. Poverty gave her no other choice, and she went to Guangdong province to become a migrant worker on an assembly line.

After more than a decade in Guangdong, where she learned to use a computer to deal with complicated tasks, Liang felt it was time to return to her hometown and ride on China's e-commerce boom by running an online store.

"At first, the store only sold my family's walnuts," she said.

"But as the store became increasingly popular and gained more online traffic, I decided to put agricultural products planted by fellow villagers on the main page of my online store."

More than 400 rural residents are now supplying their agricultural produce to Liang, with over 100 of them from impoverished families.

"Local specialties such as honey, dried long beans, almonds and eggs used to only be seen on our dining tables," she said.

"But now, with just a click of mouse, we can sell them to urban residents thousands of kilometers away."

Liang's story is part of a broader trend in China, where an increasing number of rural residents are using e-commerce platforms to sell agricultural products in a cost-effective way.

According to data from the Ministry of Commerce, online sales of agricultural products amounted to 230.5 billion yuan ($34.3 billion) last year, representing year-on-year growth of 33.8 percent.

"E-commerce has also become a key way to help the underprivileged out of poverty," Liang said.

At the ongoing second session of the 13th NPC, Liang suggested that a logistics center be built in Longnan, which is now home to more than 10,000 online stores, so that more agricultural products from mountainous areas can be sold.

"As an NPC deputy, I feel proud to contribute to the development of my hometown," Liang said.