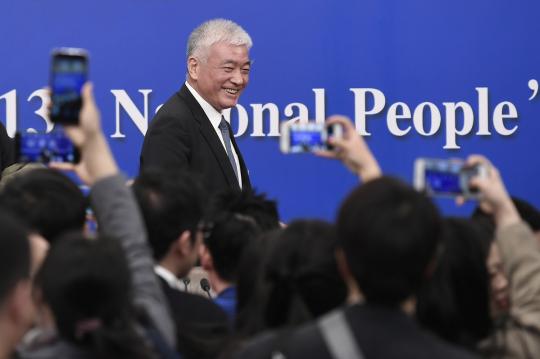 Wang Zhigang, minister of science and technology, meets with reporters after a news conference on Monday in Beijing. (WANG PENG/XINHUA)

China will continue to improve its ethics and academic integrity in scientific research to limit any negative impact on society brought by substandard practices or unethical conduct, China's top science official said on Monday.

Wang Zhigang, minister of science and technology, said the ministry has attached great importance to regulating research practices, and will continue to issue rules to guide scientists and keep research within proper ethical boundaries.

Well-designed laws and regulations can help produce new technologies that are clear of questions and therefore provide maximum benefit, and they can prevent harmful excursions into questionable territory, he said, adding that such controls will create an environment in which researchers are more professional, responsible and respectful of ethical standards.

Academic ethics came under the spotlight in November when a controversial experiment by Chinese scientist He Jiankui sparked global outrage. He announced that he had created the world's first gene-edited human babies.

Bai Chunli, president of the Chinese Academy of Sciences, told Science and Technology Daily that developments in gene-editing, cloning, lab-grown organs and other biotechnologies have challenged the traditional understanding of bioethics.

Misusing or abusing these technologies will result in serious social and moral crises, he said, though he does not support a blanket ban on all gene-editing research.

The rules need to strike a balance between encouraging scientists to explore and preventing them from going too far, Bai said. Hence it is crucial to have laws and oversight with clear boundaries, as well as enforceable punishments for violators, he said. Scientific progress to benefit mankind should be allowed, but in carefully managed ways, he added.

More instructive government guidance and oversight, stronger implementation of ethics rules in research and greater international cooperation are needed to realize AI's promise of benefits to society, he said.

Xu Anlong, a CPPCC National Committee member and president of Beijing University of Chinese Medicine, said China should strengthen research ethics and academic integrity even while streamlining administration, which some have worried could lead to weakened oversight.

"Raising ethical standards and eliminating red tape are not in conflict with each other," Xu said. "Scientists must conduct their work in a rigorous, appropriate and responsible manner, and it is high time we raised the ethical bar for research practices and academic integrity."