High-tech offers way ahead for shipyards 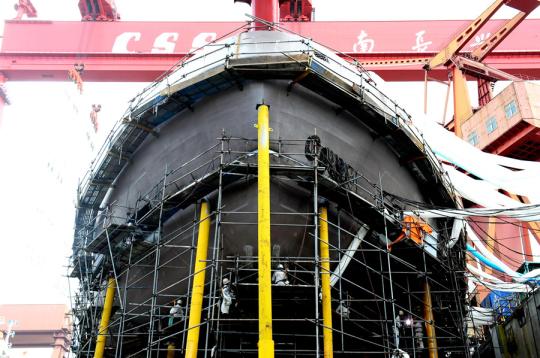 Jiangnan Shipyard (Group) Co Ltd, one of China's largest shipbuilders, will sign a new deal to construct five 15,000 TEU, or twenty-foot equivalent unit, dual-fuel container ships at the end of this month, its senior official said.

The deal will be valued at $750 million approximately in total, with each vessel worth around $150 million, said Hu Keyi, technical director at Jiangnan Shipyard, adding that the shipowner is CMA CGM SA, one of the world's top three container operators.

Hu, who is also a member of the 13th National Committee of the Chinese People's Political Consultative Conference, made the remarks in an exclusive interview with China Daily, on the sidelines of the ongoing two sessions.

The new ships are equipped with bigger membrane LNG fuel tank inside the hull, which is expected to provide strong support to long-haul container transportation. It is likely to be used in Asia-Pacific routes, he added.

Hu also disclosed that the Dongfanghong 3 scientific research ship and the research icebreaker Xuelong 2 will be delivered in the first half of this year, possibly in May or June.

The Shanghai-based company, dating back to 19th century, is a historic shipyard. It was widely regarded as the cradle of China's shipbuilding industry. Currently, it builds, repairs and converts some high-tech and sophisticated vessels.

"Chinese shipbuilders have some advantages over the traditional shipbuilding powers including South Korea and Europe. For instance, the country's shipbuilders are good at making 'tailor-made' ships," Hu noted.

Tailor-made vessels are more flexible and boast stronger performance in certain cases as it can adapt to different marine demands during transportation, he said.

To relieve the problem, Hu has proposed stepping up intelligent manufacturing in the shipbuilding sector, in a bid to promote the high-quality development of marine equipment in China.

Major shipyards in the nation now mainly use advanced machines to cut, weld and paint components, which according to Hu, is "partly automation" in the assembly line.

"China should strengthen policies to encourage shipyards to achieve smart manufacturing in more specific and detailed manufacturing processes, especially in the outfitting phase," he said.

Hu also highlighted the importance of three-dimensional models when manufacturing, saying that this is key to dynamic perception and real-time cognitive simulation during construction.

"Looking at market demand, self-driving and smart vessels are future directions. Chinese shipbuilders are expected to grasp the opportunity to catch up with global leaders in the field," he said.