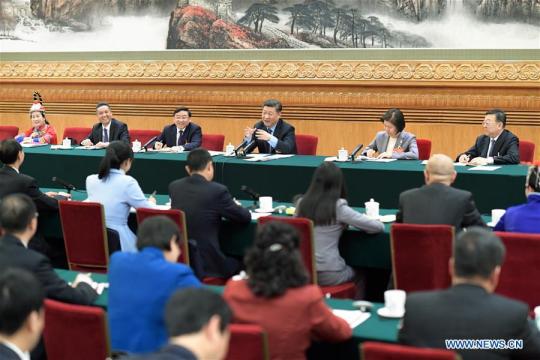 The Belt and Road Initiative has brought great development opportunities not only for China but for countries around the world, deputies to the National People's Congress from Fujian province said during a panel discussion with President Xi Jinping on Sunday.

Lan Pingyong, an NPC deputy and also board chairman of Fuzhou Hongdong Fishery Co, said that after Xi put forward the initiative in 2013, the Fujian provincial and Fuzhou city governments have taken effective steps to encourage fishery companies to participate.

Lan said the number of ships in his company quadrupled to the current 170 in just five years, and it has invested more than $230 million in the West African country of Mauritania to build a fishery base.

"We have provided more than 2,000 jobs, as well as tax revenue for Mauritania, and we have brought modern technology for fishing, processing and cold chain transport for the country," he said.

Lan added that Mauritania's president has visited his company five times, indicating the government's recognition of the company's operations.

Lan said he has received invitations to invest from some African and South American countries.

The company is planning to invest in countries such as Panama, Guinea and Suriname, he added.

Pan Yue, an NPC deputy and a professor of economics at Xiamen University, said a total of 175 trains have traveled between Xiamen and European countries under the BRI framework, and the city has opened 56 maritime freight routes.

As a key geographical point on the 21st Century Maritime Silk Road, Fujian has benefited from the country's reform and opening-up policy, with its volume of imports and exports exceeding 1.2 trillion yuan ($178.5 billion) last year, she said.

Ding Shizhong, an NPC deputy and board chairman of Anta Sports Products, said that despite the complex global economic situation last year, the company's sales increased by 44 percent.

"We sold more than 70 million pairs of shoes and 100 million articles of clothing last year," he told Xi during the discussion.