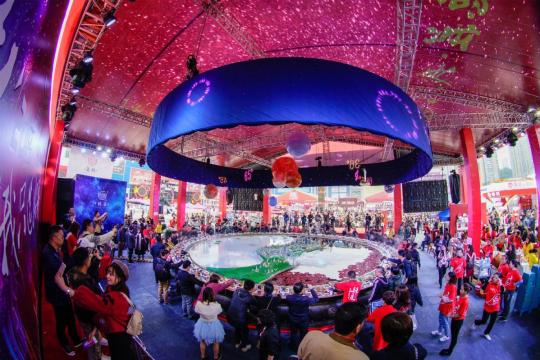 Diners eat from a huge hotpot at a festival in Chongqing. The four-day event attracted thousands of diners and enterprises. (LIU CHAN/XINHUA)

In the recent Chinese science fiction blockbuster The Wandering Earth, astronaut Liu Peiqiang tells Russian cosmonaut Makarov that he will invite him to have hotpot in Chongqing after they return to Earth. But Makarov dies before he can make the trip to China.

Although the death scene in the movie is upsetting, fans of this strongly flavored and oily local dish are delighted to see that their favorite food has become well-known-even in space.

Chongqing hotpot has become hugely popular in recent years, especially since the release of the food documentary series A Bite of China II five years ago.

It seems as though there are Chongqing hotpot restaurants in every Chinese city, even though most people in northern and coastal regions have not been big consumers of chili peppers in the past.

Many people believe the cuisine not only reflects the character of Chongqing's people but has also become a driving force of the local economy.

Hotpot cooking is believed to have spread through northern China during the Tang Dynasty (618-907). By the time of the Qing Dynasty (1644-1911), it was popular nationwide.

Although there are many regional variations, the one from Chongqing differs from other styles with its numbing, spicy soup base and special meats and sauces.

All hotpot cuisine is basically the same. While the soup simmers over a flame, meat and vegetables are placed into the pot to cook, and diners can select the items when they are ready to eat.

But Chongqing hotpot has the strongest flavor, with beef tallow, large quantities of chili and Sichuan pepper. The three must-have varieties are ox stomach, duck intestine and large pig or ox artery.

Although there is no evidence of how the cuisine originated, many believe that hotpot emerged from porters' food in the late 19th century.