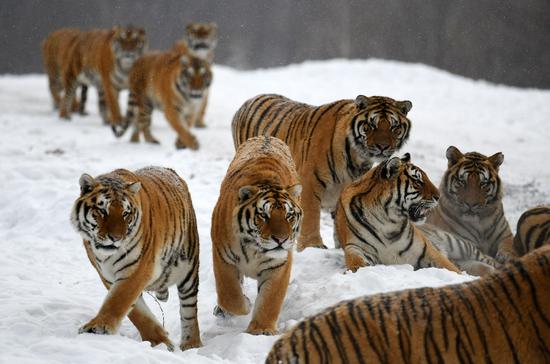 Two Chinese and Russian national reserves recently signed a memorandum of understanding (MoU), pledging to beef up cooperation in the protection of Siberian tigers and Amur leopards and in national park management.

The MoU was signed by the management bureaus of the Northeast China Tiger and Leopard National Park and Russia's Land of the Leopard national park, during a visit by the Russian conservation group to Changchun, northeast China's Jilin Province this week.

The two sides agreed to draw up a three-year road map for cooperation on big cats, environment monitoring and public education, as stipulated by the MoU.

Siberian tigers and Amur leopards mainly live in eastern Russia, northeast China and the northern part of the Korean Peninsula.

Liu Peiqi, the head of World Wildlife Fund's Northeast China program, said the increasing cross-border activities of Siberian tigers in recent years had given rise to closer cooperation in research and conservation between the two countries.

"We have seen a rising number of endangered predators in recent years, thanks to intensified efforts in habitat protection and anti-poaching," Liu said. "But we still need further cooperation between the two countries."

By the end of 2017, at least 27 adult Siberian tigers and 42 Amur leopards were reported to roam in Jilin Province, according to the provincial forestry authorities.