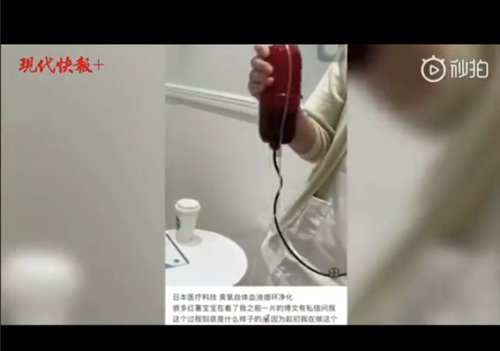 Screenshot of the "blood purification" procedure, showing blood being drawn into a bottle. (Screenshot photo)

Drawing out one's blood, injecting ozone to "purify" it and then transfusing the blood back into the body were hyped by some Chinese netizens as a new method of achieving beauty. However, experts refute the procedure for its high risk of AIDS and thrombus infection.

According to Sina Weibo user "Zhangmofan MOMO", who has more than 11 million followers, the "medical cosmetology" project to purify blood she received in Japan has four steps: acupuncture; drawing blood; injecting ozone into the blood; and finally transfusing blood back into the body, The Beijing News reported on Sunday.

The user said that the blood turned from dark red to bright red after being injected with ozone and she claimed that the altered, "fresher" blood can accelerate metabolism and help the body expel toxins.

Nowadays this practice has run rampant in many Chinese cities, including Beijing, Ningbo in East China's Zhejiang Province and Guangzhou in South China's Guangdong Province.

Global Times consulted a professional medical cosmetology website in China about the procedure on Monday, which advocated the idea that blood purification can promote metabolism.

Lü Jun, director of the laboratory of a hospital based in North China's Shanxi Province, told the Global Times on Monday that this method of medical cosmetology is similar with a treatment called Ultraviolet Blood Irradiation to treat diseases such as carbon monoxide poisoning, which was used in the hospital 10 years ago but has since been abandoned.

"The treatment has many risks, including infection of a variety of contagions and blood diseases like hepatitis B or AIDS," Lü explained.

"Patients take more risks if they undergo the treatment in beauty shops as these shops' sanitation procedures oftentimes do not meet medical standards," he added.

The director of the dermatology department of a hospital, surnamed Hua, told the Global Times on Monday that her department does use a method which draws 10- milliliters of blood, lets it come into contact with air, and then transfuses it back into the body to enhance immunity and treat acne.