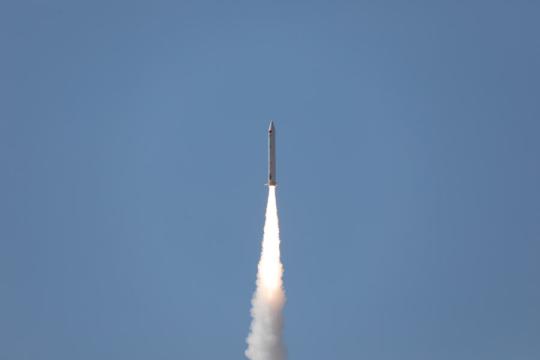 The privately-owned tech company i-Space uses its own carrier rocket to launch three satellites into space from the Gobi Desert in Jiuquan Satellite Launch Center in northwestern China on Sept 5, 2018. (Photo by Chen Xiao/chinadaily.com.cn)

The People's Liberation Army has opened one of its space launch facilities to private rocket companies in China, a major step in its efforts to implement President Xi Jinping's civil-military integration strategy.

The Jiuquan Satellite Launch Center, China's primary launch facility in the northwestern Gobi Desert, has hosted the launches of three privately built rockets since early September, when it first opened its doors to private enterprises. Officials at the center say it plans to support more private rocket missions.

Ji Duo, the center's Party chief, told Xinhua News Agency recently that carrying out launches of privately made rockets is what a world-class space center is supposed to do, and Jiuquan is willing to put privately funded missions on its launch agenda.

Jia Lide, planning chief at the launch center, said favorable policies and targeted measures have been created for the benefit of private space enterprises. The center has also set up a dedicated support system for such activities.

Xi, who is also chairman of the Central Military Commission, has repeatedly urged China's space industry to take the lead in the implementation of the civil-military integration strategy.

During his meetings in recent years at annual sessions of the National People's Congress with deputies from the PLA, the president asked them to fully understand and promote the strategy.

Xi ordered military personnel to be open-minded and share their research and development resources with others. Closed-door research and monopolies must be torn down to optimize the use of resources and stimulate innovation and public interest in defense technology, he said.

Civil-military integration has been listed as a national strategy and a priority on the government's agenda since Xi was elected the Party's top leader in 2012. It usually refers to military and defense industries transferring technologies to the civilian sector, and including private companies on the military's list of suppliers.

Both LandSpace and i-Space plan to launch at least one carrier rocket from the center this year.

China expects to launch at least 37 rockets this year, more than any other country. It led the world in launching rockets into orbit for the first time last year.