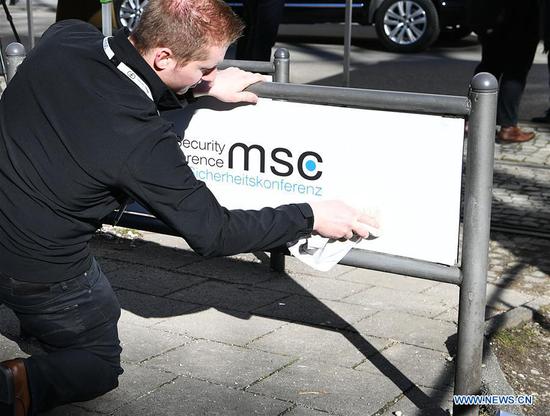 A staff member pastes a poster of the Munich Security Conference in Munich, Germany, on Feb. 15, 2019. (Xinhua/Lu Yang)

If the Munich Security Conference acts as a barometer to gauge world politics, this year has shown quite contradictory trends: confrontation and cooperation, and unilateralism and multilateralism.

In a world full of uncertainties and contradictions, China showed itself to be a staunch supporter of global cooperation and multilateralism, and its efforts to maintain the world order have been endorsed at the security conference.

"The Great Puzzle: Who Will Pick Up the Pieces?" asked the Munich Security Report published ahead of the conference. Last year the report said the world was on the brink of significant conflict and predicted a new era of uncertainty.

This time around it seems that the report went further, as it asserted that the world is returning to an era of great power competition.

Meanwhile on Saturday, China said it hopes that the United States and Russia will return to the Intermediate-Range Nuclear Forces (INF) Treaty.

Yang Jiechi, a member of the Political Bureau of the Communist Party of China (CPC) Central Committee and also director of the Office of the Foreign Affairs Commission of the CPC Central Committee, made the remarks after delivering a keynote speech at the 55th Munich Security Conference.

The unilateral declaration by the United States to withdraw from the INF Treaty has serious consequences, and has drawn widespread concern from the international community, he said.

Igor Yurgens, chairman of the Moscow-based Institute for Contemporary Development, said right now it's more about competition than cooperation in the world, adding that diplomacy does not work, and people do not trust each other at all so that things are getting worse rather than better.

Wang Yiwei, a professor specializing in international relations at the Beijing-based Renmin University, told Xinhua in an interview that cooperation and competition always go hand-in-hand, but right now due to some unilateral and protectionist acts, competition prevails.

The Munich Security Conference used to focus primarily on European and transatlantic issues. However, China has become a focus at the conference in recent years as it is playing an increasingly important role in global security issues.

In his keynote speech, Yang, the head of the Chinese delegation, said unilateralism and protectionism have been on the rise and the multilateral international order and global governance system are being challenged.

"A very good speech," said Johann Wadephul, a member of the German Bundestag and deputy chairman of the parliamentary group of Merkel's Christian Democratic Union.

Wadephul told Xinhua that Yang's speech seemed to advocate a multilateral system that he is optimistic would prevail in the world.

Besides Yang, other Chinese officials, former officials and scholars also exchanged ideas with other participants and explained China's major foreign policies that welcome global cooperation and multilateralism, such as the Belt and Road Initiative (BRI) and the concept of a community with a shared future for mankind.

Wang said both China and Europe embrace multilateralism with the United Nations (UN) at its center. Both sides stress equal consultation and participation, rather than making decisions alone.

"On every occasion participants are talking about China ... which showed that China has become strong and is approaching the center of the global stage," said Wu Shicun, president of China's National Institute for South China Sea Studies, who took part in the conference.

China is assuming more global responsibility during its development, such as its efforts to safeguard global peace and security through UN peacekeeping missions, including anti-piracy efforts in the Gulf of Aden.

"China obviously contributes its dynamic economy, participation in mutually beneficial trade, and its increasing wealth to international development, as well as its infrastructure development such as the Belt and Road Initiative," Alexander Vershbow, former deputy secretary general of the North Atlantic Treaty Organization (NATO), told Xinhua.

"One of the things I would like to see is China becoming a more regular contributor to the world's public goods," said Charles Kupchan, who served as special assistant to former U.S. President Barack Obama on national security.

"The AIIB is such a public good," he said in reference to the Asian Infrastructure Investment Bank (AIIB) initiated by China.

"China has stepped forward, creating a vehicle for development assistance. It has evolved in a positive way. It's not really competing with other lenders. It works in many cases with the existing financial institutions," said Kupchan.

"The BRI seems to be a very serious initiative with a lot of investment and a lot of international efforts. It's a big project that many countries can take part in, including Russia," said Yurgens.