Setting a new course for the economy(2) 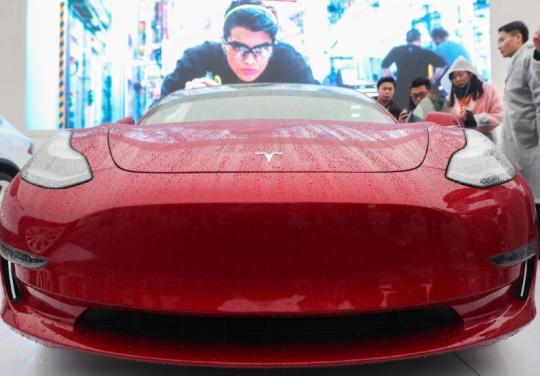 A visitor looks at a Tesla model during the opening ceremony of its Shanghai plant. (Photo/Xinhua)

China unveiled an array of measures recently to further liberalize market access for foreign investors and fuel its opening-up drive.

A shortened foreign investment negative list was implemented in July, with the number of items down to 48 from 63 in the previous version. It conforms to high international standards.

In December, China rolled out the shortened Market Access Negative List to standardize regulations in a transparent way, to help level the playing field for foreign enterprises and private firms.

Guo Zhouming, president of China Commerce Think Tank, said the nation has remained committed to the fundamental national policy of opening-up and previous examples have proved that openness brings progress.

"No country can develop itself in isolation from the rest of the world," Guo said, adding China will open wider to the world and attract more foreign investment.

Lai said that in the four decades of reform and opening-up, foreign companies made about $2.1 trillion of direct investments in the Chinese mainland. They contributed to 10 percent of China's urban jobs, 20 percent of the country's fiscal revenue and nearly half of the trade volume.

That can also be attributed to China's resolution and measures to continuously open up and reduce restrictions on foreign investment access, Yu said.

Also on the government's future agenda will be efforts to create a better business environment and passing the streamlined foreign investment law, Yu said.

China's draft foreign investment law will be submitted to the second session of the 13th National People's Congress, which is scheduled to open in March, Xinhua News Agency reported.

Capital contribution, profits and capital gains of foreign investors in China can be freely transferred out of the country as either renminbi or in other foreign currency denominations, according to the draft law.

The foreign investment law will be a basic law in that field, and its drafting is an important move in implementing the strategy of further opening-up made by the Communist Party of China Central Committee, said the decision adopted by the 13th NPC Standing Committee.

The draft law stipulates the protection of intellectual property rights of foreign investors and companies, and encourages technological cooperation "based on a voluntary basis and business rules".

The conditions for technological cooperation should be settled by all the investors concerned on a fair basis. Government officials cannot use administrative methods to force technology transfers, according to the draft law.

Ma Yu, a researcher at the Chinese Academy of International Trade and Economic Cooperation, said the move will help foster a more predictable and transparent business environment for global investors and safeguard their interests and rights.

Foreign companies operating in China, however, should adjust their strategies, as the environment both at home and abroad has undergone profound changes, said Sang Baichuan, a professor at the University of International Business and Economics in Beijing.

"China has shifted from high-speed growth to high-quality development. So foreign businesses should also change their expansion plan that focuses only on 'quantity' to emphasize both 'quantity and quality'," Sang said.

He said that foreign investment must avoid creating excess capacity in China, as the country's economic structure has been changing and competition intensifying.

Foreign direct investment into the Chinese mainland rose 0.9 percent year-on-year to 885.61 billion yuan in 2018, according to the Ministry of Commerce.

A total of 60,533 new foreign-funded companies were established last year in China, up 69.8 percent year-on-year, data showed. During the period, FDI flowing into the traditional manufacturing sector increased 20.1 percent from a year earlier.

Inspired by the government's efforts, foreign companies in various sectors have expressed optimism about the Chinese market. Foreign enterprises are not only participants and drivers of China's reform and opening-up, but also beneficiaries of the undertakings, said She Duanzhi, vice-president of Nike China.

Tao Lin, vice-president of Tesla Asia-Pacific, said the automaker has achieved accomplishments in China in a short period of time, and the company's factory construction in China is faster than in other markets, thanks to the improved business environment in China and the overall industrial climate.

US-based Tesla Inc broke ground on its Shanghai plant on Jan 7, becoming the first company to benefit from a new policy allowing foreign carmakers to set up wholly-owned subsidiaries in China.

James Zhan, president of Tata Group China, said: "I am very pleased that the Chinese government has repeatedly stressed that foreign companies are welcome to participate in the market."

"An economic environment with involvement of various foreign companies is important for China's healthier development," Zhan said, stressing that his company remained confident on the Chinese market.

This made the Swiss bank the first global financial institution to take advantage of the new rules China put in place to further open up its financial market.

According to an announcement released by UBS on Dec 24, the company raised its stake in its joint venture UBS Securities Co from 24.99 percent to 51 percent.

Eugene Qian, president of UBS Securities, said with majority control, UBS can better realize its opportunities in China's capital markets and make a greater contribution to the UBS Group.

(Xinhua contributed to this story.)