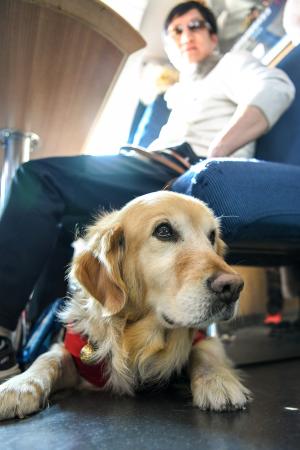 Little Q, a golden retriever guide dog, sits with its owner, who is visually impaired, as Spring Festival travel gets into full swing at Suzhou North Station in Suzhou, Jiangsu province, on Jan 24, 2019. (Photo/Xinhua)

Little Q, a golden retriever in a red vest, embarked on a 1,300-kilometer journey with his master during the Spring Festival travel rush.

"Little Q is my eyes, and I can rest assured with him," said Su Bo, the dog's owner, who is visually impaired.

With the help of Little Q and railway staff members, Su made it onto high-speed train G1956 on Sunday, as he traveled from Suzhou, Jiangsu province, to his hometown of Taiyuan, Shanxi province.

The travel rush began 15 days ahead of the Chinese Lunar New Year, which falls on Feb 5 this year. Nearly 3 billion trips will be made via China's public transportation system.

A steward led Su and Little Q to a seat near the restroom and handed Su a service bell. When he presses a button on the device, a crew member comes to help.

Designed for people with disabilities, seniors and children traveling alone, the service bell was introduced by the Nanjing railway authorities for a pilot run during this year's Spring Festival.

"There is a QR code on each table. Passengers can scan it to order food online. But it may not be helpful for seniors or people with disabilities, so we started using this device," said Zheng Ying, head of the train crew.

China has more than 17 million blind and visually impaired people. Many are confined to their homes due to the inconvenience of going out.

"I appreciate their kindness and considerate service," said Su, a columnist for a magazine in Suzhou.

He was diagnosed with an eye disease at the age of 30 and eventually lost his sight. In 2013, he got the guide dog, which was 2 years old at the time.

It was the first time Su, accompanied by his guide dog, had been able to travel home alone. It was a tedious journey for Little Q, who lay silently under the table for most of the journey－unless his master needed help.

Su fed him before the train started and offered him some water on the nine-hour trip.

"I have to control his food intake. It's a problem if the dog needs to pee or poop on the train," Su said.

According to Chinese regulations, passengers are banned from carrying animals on trains. However, the China Railway Corp and the China Disabled Persons' Federation came up with a regulation in 2015 allowing visually-impaired people to take guide dogs on trains.

When Little Q appeared on the train, passengers were curious. Some children even tried to pat or feed him. The train crew explained that they must not disturb the dog when it was doing its work.

"I feel warm as people with disabilities can be respected and join the Spring Festival travel rush to go home," said passenger Wang Jun.

Little Q will retire in a year, but Su hopes to stay with his friend.

"Little Q has been my guide for years. When we arrive in Taiyuan, I want to be his tour guide and introduce my hometown to him," he said.