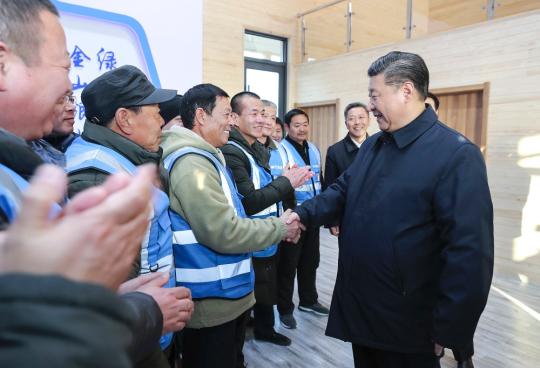 President Xi Jinping encouraged enterprises in Xiongan New Area to seize a very rare opportunity as he made a visit to the new zone on Wednesday.

It was Xi's second visit to Xiongan. His first visit was in February 2017, when he presided over a meeting on the planning and construction of the new area.

Xiongan, established in April 2017 and about 100 kilometers southwest of Beijing, is the third new area of national significance after the Shenzhen Special Economic Zone and Shanghai's Pudong New Area.

On Wednesday morning, Xi met with representatives of enterprises that already are putting down roots in Xiongan when he visited the government affairs service center there.

Noting that they are the new area's first new entrepreneurs, Xi said construction of Xiongan requires the joint participation of all kinds of companies — State-owned and private, from the local area or based in Beijing.

All companies should seize the golden opportunity and ride the wave of national rejuvenation, reform, and innovation in order to create outstanding achievements, Xi said.

Xi's visit follows the approval in December of the 2018-35 master plan for the area.

According to the plan, Xiongan will strive to build first-class, global technology and innovation platforms, the best research universities to foster talent and innovative policies, and mechanisms to serve growing technology firms.

Xi also visited the planning exhibition center, where he had a conversation via video link with workers at the construction site of Xiongan station, part of the Beijing-Xiongan intercity railway.

Xi, also general secretary of the Communist Party of China Central Committee, extended cordial greetings and best wishes on behalf of the CPC Central Committee to the railway builders in Xiongan and all over the country for their hard work during the year's coldest days.

Xi said transportation comes first in city construction and economic development, and rail workers' contribution should not be ignored as they blaze the trail for construction of Xiongan New Area, which bears crucial significance for the millennium to come.

Xi said he hoped the workers will ensure safety during construction and finish the work on time with the assurance of quality.

On Wednesday afternoon, Xi also visited a forestry zone and met with local forest rangers in the new area, where more than 6,600 hectares of trees were planted last year.

According to the area's master plan, forest coverage will rise from 11 percent to 40 percent by 2035.

Xi said the highest standard of life is represented by a good environment with blue skies, clear water and green trees.

Xiongan is destined to become a highly livable place, given its natural conditions and ongoing efforts, he said, adding that it should embody its values and enhance its attraction with its high-quality environment.

After his trip to the new area, Xi also visited Tianjin and Nankai University there. On the campus, he learned about the university's history, its discipline-building and talent-building efforts and scientific research and innovation.