Renewable energies offer the way ahead 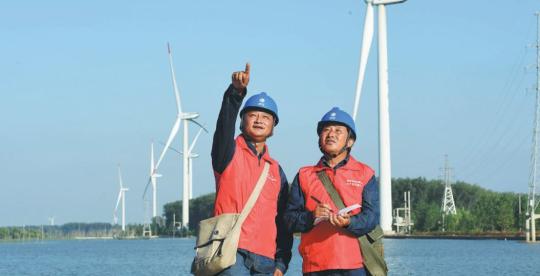 As fossil fuels are finite resources and the world's current energy mix is harmful to the environment, countries worldwide are making efforts to increase the use of renewable and clean energies, with each nation adopting a different approach.

For China, which relies heavily on coal-fueled power, whether the country will be able to replace coal with renewable energy as its top energy source is vital for the country's transition to a more efficient and lower-carbon energy mix, experts said.

Renewable energies are seeing lower average costs compared to fossil fuels as technologies develop, and China does not need to depend on oil and natural gas in a transitional phase before renewable energies dominate its market, according to the China Renewable Energy Outlook 2018.

The report was released by the China Renewable Energy Engineering Institute, a think tank under China's National Energy Administration, during the 2018 International Forum on Energy Transitions in Suzhou, Jiangsu province, in October.

China's fossil fuel consumption is likely to peak in 2020, and will decline steadily afterward, the report said. It predicted the use of coal in electricity generation and industrial sectors will continue to decrease, while rapidly increasing electricity applications in transportation and industrial sectors will also reduce the country's reliance on oil and natural gas, the report said.

There will be a strong solar and wind power boost in China between 2020 and 2030 due to declining costs. During this period, new solar photovoltaic installed capacity will reach 80-160 gigawatts annually, and installed wind power capacity will increase 70-140 gW every year, the report said.

By 2050 these two energies will comprise the absolute majority in China's energy mix, according to the report.

Li Junfeng, director of the renewable energy branch of the China Energy Research Society, observed that China's progress toward a greener energy mix is significant, especially in electricity generation.

Coal represented about 70 percent of China's energy mix in 2011, declining 1.5 percentage points on average annually since then, whereas clean and renewable energy applications have been increasing quickly, he said.

"Coal-powered electricity has dropped to 65 percent as a proportion of total electricity generation from about 85 percent five years ago," he said. "Such progress is significant."

"The process toward using less polluting coal and more clean energy is one that has been accelerating over the past few years, and this trend is very unlikely to change in the short to medium term in China," said Joseph Jacobelli, a senior analyst of Asian utilities and infrastructure at Bloomberg Intelligence in Hong Kong.

"The key implications for industry participants from the shift away from coal has been an acceleration in the construction of renewable energy facilities by the big nationwide generation groups," he said.

In 2016, the Chinese government issued a plan to promote reform in energy production and consumption. The plan set the aim that by 2030, non-fossil energies, mainly renewable and nuclear energies, will account for 20 percent of the nation's total energy consumption, and 50 percent of the total electricity generation.

The country expects to have nonfossil energy account for more than half of its energy mix by 2050.

In 2017, renewable energy accounted for 11.7 percent of China's primary energy consumption, while the global average was 10.4 percent, according to the China Renewable Energy Development Report 2017, released together with the CREEI report during the forum in Suzhou.

China was home to 650 million kilowatts of renewable energy installations at the end of 2017, equal to 36.6 percent of the country's total installed electricity capacity, increasing 14 percent year-on-year, according to the report.

Electricity generated from renewable energy sources reached 1.7 trillion kilowatts hours in 2017, amounting to 26.5 percent of the total power generation, with a year-on-year increase of 9.7 percent.

The International Energy Agency said China has one-third of the world's wind power capacity, one-fourth of its solar capacity, six of the top 10 global solar-panel manufacturers and four of the top 10 windturbine makers.

The country sells more electric vehicles than the rest of the world combined. It also leads the world in construction of nuclear power plants, the Economist reported earlier this year.

In late 2017, IEA predicted that installed low-carbon capacity in China, led by hydropower, wind and solar PV, would grow rapidly to comprise 60 percent of total capacity by 2040.

Average solar PV projects will become cheaper than both new and existing gas-fired power plants in around 2020, and cheaper than new coal-fired capacity and onshore wind by 2030, it forecast.

Jacobelli said China's energy mix is updating with a particular focus on wind power, as the change means greater capacity investments in the nation's clean energy producers, including wind and nuclear power developers.

However, Li from the CERS, who is also former director and researcher at the National Center for Climate Change Strategy and International Cooperation, said natural gas is also a form of clean energy, and deserves more applications in China.

Many of the country's energy giants, especially those in the oil and gas industry, have seen the renewable energy sector accounting for a bigger proportion in their businesses in recent years. They have pledged to gradually increase the share of clean energy production capacity through increasing output of natural gas and related facilities.

China National Petroleum Corp, the nation's largest oil and gas producer by annual domestic output, has vowed to gradually boost its domestic natural gas output while importing more clean energy from abroad. It aims to develop its low carbon business as a new driver of development for the company by 2035.

CNPC said the company's domestic natural gas production will account for more than half of its domestic energy output by 2020.

China Petroleum and Chemical Corp, the world's largest refiner, is also betting big on the country's new energy forecast. It is shifting its focus from oil to gas, foraying into the shale gas and geothermal energy in recent years.

China National Offshore Oil Corp has also been bolstering its liquefied natural gas storage facilities to ensure adequate supplies of the cleaner fuel to the country.