Expert: Nation is leader in growth of new energy 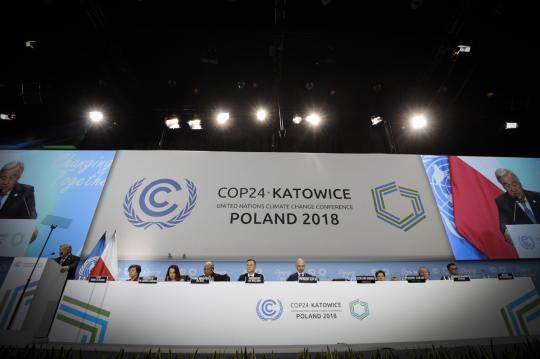 The 24th Conference of Parties to the United Nations Framework Convention on Climate Change, or COP 24, opens in Katowice, Poland, Dec. 3, 2018. (Photo/Xinhua)

China tops the world in its effort to reduce carbon emissions, despite the enormous challenges it faces as a highly populated developing country, according to a senior Chinese climate change expert.

He Jiankun, deputy president of China's National Expert Committee on Climate Change, made the comment on Tuesday on the sidelines of the ongoing 24th Conference of Parties to the United Nations Framework Convention on Climate Change, or COP 24, in Katowice, Poland.

"China surpasses other countries in carbon emissions, as it is large not only economically but also in territory and population. The country, however, is making great efforts in transforming its energy structure and it tops other countries in the growth of new and renewable energies," He said.

China has the largest hydroelectric, wind and solar power generating capacities in the world and also leads all countries in annual growth of those three types of energy. The country's investment in new energy, the largest in the world, is still expanding at unparalleled speed, he said.

By the end of last year, China's renewable energy generating capacity had reached 650 million kilowatts, up by 14 percent year-on-year. A total of 1.6 trillion kilowatt-hours of hydroelectric, wind and solar power were generated in the country last year, according to China's Policy and Actions for Addressing Climate Change (2018).

On average, the world is seeing its carbon intensity－emissions per unit of GDP－decrease by no more than 2 percent a year, half the rate of China. China's decrease in carbon intensity is much faster than that of developed countries, He said.

China's carbon intensity last year was 46 percent lower than in 2005, fulfilling China's goal to cut carbon emissions by 40 to 45 percent by 2020. The country plans to further cut emissions to lower the intensity by 60 to 65 percent and increase the ratio of energy from nonfossil fuel in the national energy structure to 20 percent by 2030.

He also said the country is expected to sell 1 million to 1.5 million electric cars this year, which is more than half the world's total sales of such vehicles.

China has produced these huge achievements even though it faces greater challenges than developed countries in reducing carbon emissions, he said.

"As a developing country, we must coordinate our efforts to promote sustainable development and tackle climate change. We have to improve people's livelihoods by developing the economy. Meanwhile, we have to try to lower the carbon intensity," he said.

With other environmental challenges addressed, however, the developed countries, which have achieved broad modernization, are able to－and also should－have their efforts focused on carbon reduction, he said.

Many countries have been expecting China to play a leading role in curbing climate change now that the United States has withdrawn from the Paris agreement. "But to play a leading role doesn't necessarily mean that China should do something beyond its capability or without considering its national conditions," He said.

"Instead of taking up the responsibility that should be shouldered by the United States, we should do what we can based on our own capabilities," he said. "Developing countries are faced with no other options but to adhere to a low-carbon development path to reduce emissions while promoting social and economic development. China's experience provides instructive references for other developing countries."

China has shown great leadership in tackling climate change, said Meenakshi Raman, legal adviser and coordinator of the climate change program of the Third World Network, which was formed to strengthen cooperation among development and environmental groups in developing countries.

China still tops the world in carbon emissions. But it's not valid to compare the emissions of China with those of developed countries, she said.

"It's not the same because, in the history of climate change, many of the problems we are facing today arose largely because many of the developed countries, which have become rich, did not constrain their carbon emissions," she said.

In an interview with Xinhua News Agency, UN General Assembly President Maria Fernanda Espinosa said China has a "critical role" in tackling climate change and has made "immense progress" on low carbon technologies, as well as policy work on the reduction of emissions.

"I'm impressed with China's commitment to its climate goals, as indicated by the fact that it has met its 2020 target three years ahead of schedule," Espinosa said.

"I think China's demonstration of the mutually reinforcing goals of climate action and economic development can go a long way to encourage others to increase their ambition to achieve a sustainable and prosperous future."