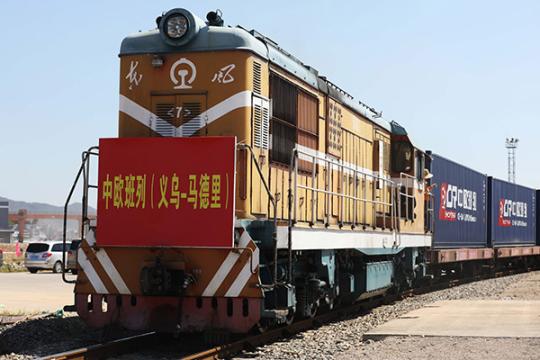 A freight train, which travels between Yiwu, Zhejiang province, and Madrid, in Spain, is parked in Yiwu. (Photo by Zhu Xingxin/China Daily)

When most Chinese people think of Spain, they think of good ham, soccer or flamenco dance. They may also think about an old European country, and the origin of one of the most spoken languages and influential cultures in the world: Spain ranks third (just after China) on the UNESCO's list of World Heritage Sites.

All this explains why Spain is the second most attractive tourist destination in the world. In particular, more than 80 percent of the tourists revisit Spain. And Spain was the top European destination for Chinese tourists during the last Chinese New Year holiday.

But this is only part of the whole story.

Spain is the country with the longest life expectancy in Europe, and the second longest in the world. The healthy Mediterranean diet and an active lifestyle may contribute to it, but the main reason is that the Spanish Public Health System is one of the best in Europe, with an efficient hospital network and universal healthcare coverage.

On the economic front, Spain is the fourth-largest economy in the eurozone, and 14th globally. Spain has been among the fastest growing economies in Europe in the last few years, driven by exports. Many people in China know our agricultural products, but two-thirds of our exports to China are industrial goods. Also, Spain is ranked 13th on the lists of both global investors (second in Latin America) and investment recipients.

Spanish companies are leaders in many high-tech fields. For instance, about 3,000 biotechnology enterprises produce 4 percent of our GDP. In 2016, almost 40 percent of the total power generated in Spain came from clean, renewable energies. As for new materials, Spain is the world's fourth-largest producer of graphene. We are also one of the most advanced countries in Europe in digital solutions for smart cities.

Besides, Spain is second only to China in the size of high-speed train network, and has modern infrastructure across the board－and infrastructure is a powerful driver of productivity.

Let's now turn to politics. That Spain and China have a comprehensive strategic partnership reflects the high level of our bilateral relations. President Xi Jinping's visit to Spain in November 2016 is an expression of this close relationship. As a large European country, Spain plays an important role within the European Union, and the EU is important for China in many issues, including the defense of the multilateral system.

Indeed, Spain shares with China the need to defend the multilateral, rule-based world order. Still, Europe and China together must address issues such as the opening up of markets, a level playing field for competing industries, and intellectual property rights protection.

To this end, it would be important to complete negotiations on the China-EU Investment Agreement, which has been dragging on for years. It was heartening to hear President Xi referring to this goal in his recent speech at the China International Import Expo in Shanghai earlier this month.

Spain also welcomes China's Belt and Road Initiative, and we want to cooperate with the initiative on the basis of concrete projects between Chinese and Spanish companies, and respect for the international principles that regulate such cooperation. And many of these projects could take place in third-country markets, in areas of the world where both countries have an important presence, such as Europe, Latin America, Africa and Asia.

There are many other things we can do together. For instance, we must make it easier for Spaniards to learn Chinese, and for Chinese to learn Spanish. Spanish is the second most spoken language in the world as well as the second most used on the internet. In fact, the Chinese government has recently decided to include Spanish as one of the foreign languages available to students in secondary schools. This is an important step forward. Also, there is enough room for cooperation in higher education, as three Spanish business schools rank among the top 20 in the world and many Chinese universities excel in scientific research.

Spain and China are thousands of miles apart and have different cultures and traditions. But they still have striking parallels in their recent histories. In 1826, China produced 30 percent of the world's GDP, but that proportion fell sharply after the Industrial Revolution. On the other hand, Spain was a world power and the center of a large empire in the 1820s, but its global profile declined drastically in later years. Both countries went through a civil war in the 1930s. And both have changed profoundly in the past 40 years. China launched reform and opening-up in 1978, and in the same year, Spain adopted its present Constitution, which has presided over a period of profound economic and political transformation.

These similarities make me think that, in spite of our obvious differences, the Chinese and the Spaniards may look at the world today in ways that are not so different－with our self-confidence stemming from our ancient cultures and our capacity to overcome difficult moments in our respective histories, and with the certainty that we are equally capable of facing up to the challenges in the future.

The author, Rafael Dezcallar de Mazarredo, is Spain's ambassador to China. He contributed this article to China Watch, a think tank powered by China Daily.