President kicks off visit to Portugal 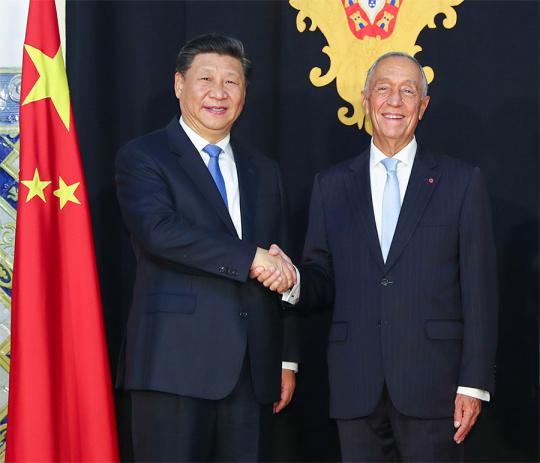 President Xi Jinping arrived in Lisbon, Portugal, on Tuesday, kicking off the first state visit by a Chinese head of state to the country in eight years.

Upon his arrival, Xi said that China and Portugal enjoy a traditional friendship and that their long-lasting bilateral relations have withstood the test of time, as well as changes in the international landscape.

Proper resolution of the Macao issue in 1999 set an example for nations in tackling leftover issues from history through friendly consultations, Xi said.

In 2005, China and Portugal established a comprehensive strategic partnership, and stepped up mutually beneficial cooperation that has brought tangible benefits to both peoples, the president said.

Xi stressed that next year marks the 40th anniversary of China-Portugal diplomatic relations, marking a new historical starting point for the development of bilateral ties.

He added that he expects to meet with Portuguese President Marcelo Rebelo de Sousa and Portuguese Prime Minister Antonio Costa to draw up a blueprint for future cooperation between the two countries.

Relations between Portugal and China are excellent, the ambassador said, adding that institutional contacts are strong and there is mutual understanding regarding major bilateral and international issues.

Cultural festivals will be held in both countries next year to help foster greater understanding and knowledge of the culture, art and history of each, Duarte said, adding that he believes there is huge potential to broaden relations.

Economic relations have markedly improved in the last decade, with significant growth of Chinese investment in Portugal and increasing trade exchanges, Duarte said.

China is Portugal's largest trading partner in Asia, and Portugal is one of the main destinations for Chinese investment within the European Union.

"It would be positive if China could take advantage of these conditions and further invest in Portugal in the industrial sector－investing in a country that can provide high quality agriculture and industrial products," he said.

Portugal supports increased connectivity between Asia and Europe, he said, adding that he believes the Belt and Road Initiative will contribute to greater connectivity.

He said the Port of Sines could play a key role in connecting China and Portugal, as well as the rest of Europe. The port is one of the main deep-water ports in Europe.

Portugal and China are two maritime nations with enormous cooperation potential, Duarte said. Portugal was the first country in the EU to establish a maritime partnership with China, often referred to as a blue partnership.

"I believe there is particular room for improving scientific cooperation, as well as for deepening joint research and investigation," he said.

The ambassador added that Portugal and China should also address concerns on the environmental sustainability of the sea, which would open new opportunities to work together.