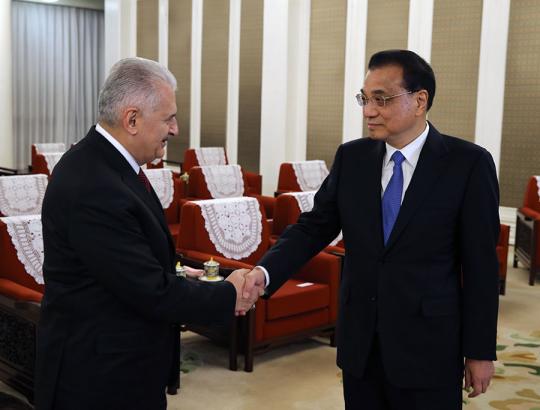 Premier Li Keqiang called on Tuesday for the promotion of balanced trade with Turkey and further aligning the Belt and Road Initiative with Turkey's development strategies.

Li made the statement when meeting with Binali Yildirim, speaker of the Grand National Assembly of Turkey, in Beijing.

As emerging economies, China and Turkey have been vital partners for each other, Li said. The premier said President Xi Jinping met with Turkish President Recep Tayyip Erdogan on Friday on the sidelines of the G20 Leaders' Summit in Buenos Aires, Argentina.

The countries should continue to respect each other's core interests and major concerns under the principles of mutual respect and equal treatment, Li said. He called for strengthened cooperation at diverse levels and in various fields, including legislative exchanges, to promote the continuous and healthy development of bilateral ties.

The premier said there is great potential for cooperation and the countries should develop their own advantages to promote more balanced trade and make new progress in key fields.

In response, Yildirim said Turkey and China are located at the two ends of Asia as strategic partners. Turkey speaks highly of China's achievements in its reform and opening-up and is willing to constantly deepen its relations with the world's second-largest economy, he said.

He said Turkey would also like to strengthen the alignment of development strategies with China and enhance cooperation in fields such as infrastructure, trade and investment, which will help achieve the co-development of both countries.

Yildirim started a four-day visit to China on Monday at the invitation of Li Zhanshu, chairman of the National People's Congress Standing Committee.

They held talks at the Great Hall of the People in Beijing on Monday, pledging to strengthen parliamentary exchanges and cooperation to strengthen bilateral ties.

The countries, which established diplomatic ties in August 1971, have focused on cooperation in transport, power generation, energy and the financial sector, according to the Foreign Ministry website.