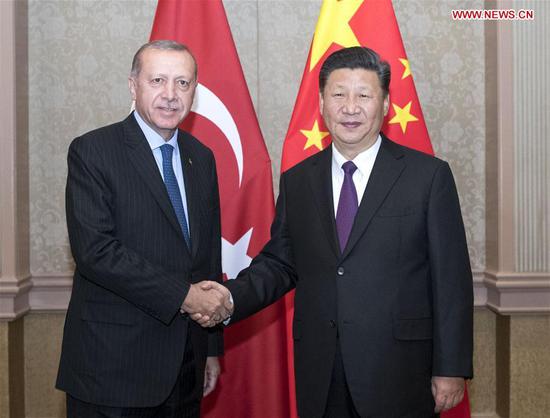 Xi and Erdogan met on the sidelines of the 10th BRICS summit in Johannesburg, South Africa.

The China-Turkey strategic cooperative relationship has seen smooth development in recent years with progress achieved in cooperation in various fields, Xi said, adding that China is willing to make joint efforts with Turkey to refresh and further promote bilateral cooperation.

Xi urged both sides to transform the consensus reached by him and Erdogan into concrete results, maintain exchanges at all levels and in various fields, enhance political mutual trust, boost policy communication, take care of each other's core interests and major concern, and strive for breakthroughs in security and counter-terrorism cooperation.

Calling China and Turkey natural partners in the joint construction of the Belt and Road, Xi said both sides should push for an early launch of major cooperation projects and achieve early results in aligning their development strategies.

He also called on the two countries to deepen people-to-people and cultural exchanges.

Turkey is an important emerging market economy in the Middle East, Xi said, stressing that China is looking forward to strengthening communication and cooperation with Turkey through the "BRICS Plus" model.

Erdogan said the development of Turkey-China relations is satisfying.

Turkey is willing to carry out closer high-level exchanges with China and deepen cooperation in such fields as economy and trade, investment, infrastructure construction, counter-terrorism and security, which is conducive to regional development and stability, he said.

The Turkish side supports the joint construction of the Belt and Road, opposes protectionism and stands for free trade, said Erdogan, adding that his country is willing to boost communication and coordination with China in international affairs. 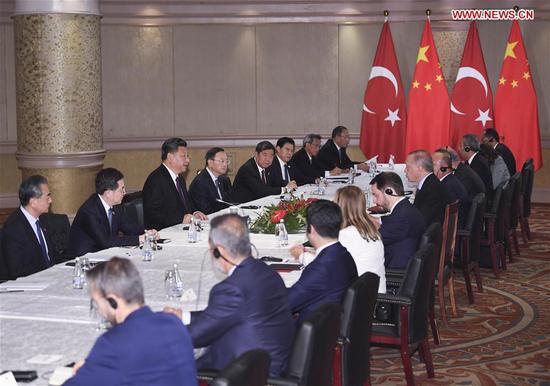