What caught Xi's eye at the reform and opening-up exhibition?

President Xi Jinping, also general secretary of the Communist Party of China Central Committee and chairman of the Central Military Commission, visits a major exhibition commemorating the 40th anniversary of China's reform and opening-up at the National Museum of China in Beijing on Nov. 13, 2018. (Photo/Xinhua)

What attracted the attention from President Xi Jinping at a major exhibition marking the 40th anniversary of China's reform and opening-up in Beijing? Let's look at the story behind these exhibits. 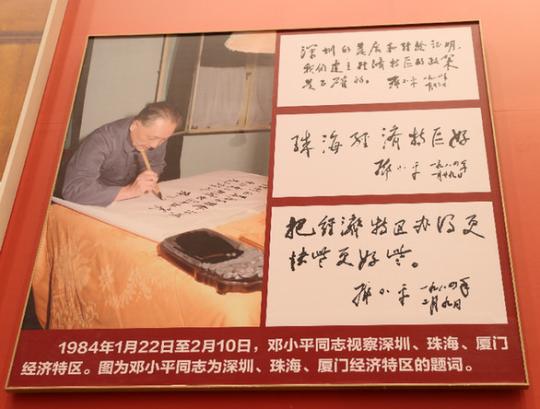 An inscription by Deng Xiaoping

The first was an old photo of Deng Xiaoping in 1984, depicting the former leader writing inscriptions for special economic zones in Shenzhen, Zhuhai and Xiamen.

"'Develop the special economic zone in a faster and better way.' This inscription was written in 1984 for Xiamen," Xi said while looking at the picture.

Xi recalled his work experience in Xiamen more than 30 years ago. One year after the inscription, "I went to work in Xiamen in 1985 and realized there was no time to lose," Xi said. "Xiamen must catch up, as other special economic zones had developed fast."

Xi took up the post of deputy mayor of Xiamen in the summer of 1985, when the State Council expanded the special economic zone to the whole island.

Xi said the special economic zones were born from the reform, and they play the role of a laboratory of reform and an important "window" in opening up to the outside world, making great contribution to the nationwide reform and opening-up and socialist modernization.