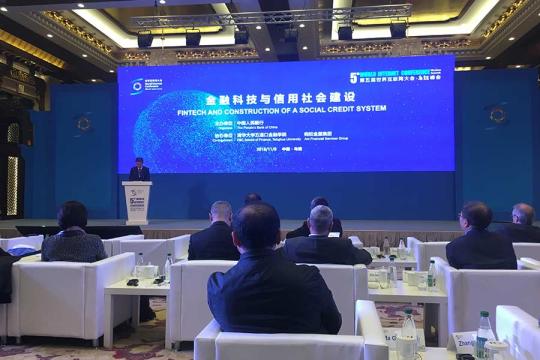 The Fintech and Construction of a Social Credit System Forum is held at the fifth World Internet Conference in Wuzhen, Zhejiang Province, on Nov. 8. (Photo by Richard O'Neill/chinadaily.com.cn)

The role of fintech in the development of a social credit system was discussed by Chinese government officials and technology experts from around the world at the Fintech and Construction of a Social Credit System Forum on the second day of the fifth World Internet Conference in Wuzhen, Zhejiang Povince, on Nov. 8.

Eric Jing, executive chairman and CEO of Ant Financial Services Group, highlighted the success of the Alipay-affiliated Ant Forest mobile app, which had 280 million users by the end of 2017, and how its premise can form the basis of a successful social credit system.

Jing explained how the app rewards users for taking actions which are good for the environment, such as using public transport instead of driving a car, by giving them credit in the form of virtual energy, with which Ant Forest will plant a real tree.

Jing also said that the overwhelming success of the app proves that there is a real desire among Chinese people to do good deeds when there is a clear incentive to do so, as would be the case with the social credit system.

Fan Yifei, deputy governor of the People's Bank of China, laid out how technologies such as Artificial Intelligence (AI), big data and blockchain are being applied to the financial industry and are making the day to day life of the banks and their customers more convenient, but also warned of the potential risks that fintech can bring, such as fraud.

Addressing the forum, Yifei said that with the innovations in technology he is confident that the social credit system will be a success, but that innovative development and risk prevention are essentially twins and to meet the demands from people for a better life and for the system to be successful, both must be considered in equal measure.

Whitfield Diffie, winner of the 2015 Turing Award, underlined the importance of blockchain technology in fintech and the ultimate implementation of a social credit system, saying that as fintech is essentially replacing the phenomenon of cash for a large proportion of daily transactions, a fair, transparent system is needed to assure people of its safety. Diffie said that as long as the risks are duly considered and dealt with, blockchain technology can provide this assurance, and as such confidence in the systems utilizing it will grow as a result.

Li Yang, chairman of the National Institution for Finance and Development, said that the aim of the social credit system is a noble one –to build a more trustworthy society. As more and more industries and factions of society embrace technology, the most cutting-edge innovations should be employed in the development of the social credit system for it to reach its full potential, he added.