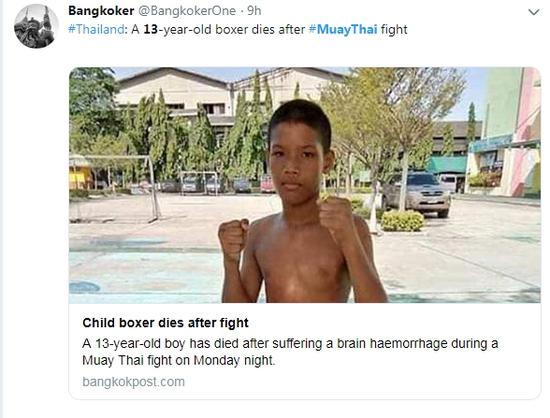 The death of a 13-year-old boy during a Thai boxing match has inflamed debate about whether children should be allowed to take part in a dangerous sport that many of them see as their only chance of escaping poverty.

Anucha Kochana was pronounced dead from a brain hemorrhage on Monday after he was knocked out in a match on the outskirts of Bangkok on Sunday evening.

Thai boxing, or Muay Thai as it is known, is a passion in Thailand with millions of boys dreaming of glory in the ring, and a life of riches, for them and their families, that success can bring.

But the sport is governed by few rules – children of any age can box in an organized match – leaving them at risk of severe injury, or worse, as Anucha's case has sadly shown.

The boy's grieving relatives told journalists they would not press charges over his death.

Legislators appointed by the military government have already been looking to tighten regulations to ban children under the age of 12 from professional bouts.

But the effort is opposed by many in the boxing community.

“Those aged 12 to 15 will need to be registered, have the permission of their parents and wear protective gear for professional fights,” General Adulyadej Inthapong, vice chairman of the National Legislative Assembly's committee on sports, told Reuters, referring to the proposed law.

Footage of Anucha's last fight posted on social media shows the boy, without any protective gear, getting punched repeatedly in the head before falling down and banging his head on the mat.

Somchart Charoenwatcharawit, president of the Professional Boxing Association of Thailand, said the proposed changes would hurt the livelihood of an estimated 300,000 child boxers under the age of 15.

“The new rule will hurt the children and their parents who earn tens of thousands of baht from boxing in what is a national sport,” Somchart said.

He said the referee on Sunday should have stopped the fight when Anucha looked groggy and the match did not meet his association's standards.

The association thinks the minimum age for boys taking part in organized bouts should be 10, he said.

Jiraporn Laothamatas, a neuroradiologist and director of the Advanced Diagnostic Imaging Center, has studied the damage that boxing can inflict.

Her research has fueled the push for change but she says even the proposed minimum age of 12 for the competition is a compromise that she disagrees with.

“If I had my way, the minimum age would be 18,” she said while acknowledging that Muay Thai is an important source of income for many, as well as being culturally important.

“The change in the law is being delayed because the industry makes a lot of money from child boxing,” she said.

“It will take some guts for the government to push it through.”