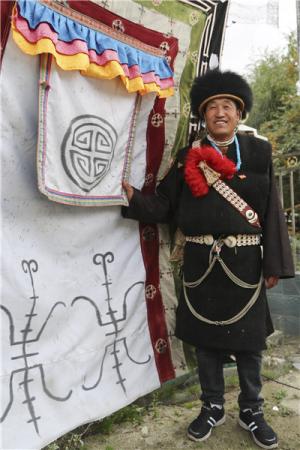 Dawa is dedicated to making the traditional costumes of the Lhopa ethnic group. (PALDEN NYIMA/CHINA DAILY)

Dawa is an ethnic Lhopa man living in the Tibet autonomous region's Manling, a county with a long history in growing medicinal plants and developing Tibetan medicinal science.

Surrounded by the snowcapped mountains of Nyingchi and with dense forests in the center - a lush, green land filled with fruit trees - the county is home to the small ethnic group of which Dawa is a part.

The Lhopas have been living in the Himalayan region since ancient times. Today it is home to more than 3,000.

"We used to live on the mountain and in the forest. We had no livestock and only limited fields for planting corn. We had a miserable life suffering from hunger and difficulties," said Dawa, who is in his early 50s.

Like his ancestors, Dawa was a hunter's son. He lived on the mountain before the 1980s.

At that time, life was hard. Having lived in simple wooden shack, his family often suffered from hunger.

In 1985, the Lhopas were relocated to the valley with the support of the government, and they were provided new houses, fields and livestock. According to Dawa, 80 people in 18 households were relocated from remote mountain areas to Tsedro village in 1985.

Since then, the number of households has increased to 41, with more than 190 people.

Dawa is one of the Lhopas who benefited from the change. He worked as a village official for many years and now is a respected maker of Lhopa costumes.

"Thanks to the relocation, our livelihoods improved dramatically," he said. "We had a fair opportunity to benefit from modern conveniences and technology, and our people have been benefiting from roads, education, living conditions, hygiene and food."

For instance, in their days on the mountain, the Lhopas had only one doctor who lived in a distant village and was capable of treating only minor diseases.

Midwives assisted in births at home, frequently resulting in infant injuries and deaths, he recalled.

Now, in Manling, the Lhopas have a village clinic. With insurance, their medical spending is also partly covered, Dawa said. His family now has a reasonable income.

An increasing number of tourists inspired Dawa to start his own Lhopa costume business in 2008.

It contributes to his family's income, but for him it expresses how much he values culture and history.

"Few people can still make our costumes. Our culture needs to catch up with changes," Dawa said, noting that the Lhopa clothing is listed as a regional intangible culture heritage.

Dawa learned the skills from elders while living on the mountain. Nowadays, however, obtaining genuine materials - animal skins and fur - is a challenge.

Instead of hunting, artificial materials available in the market are purchased. Some people use stored animal skins and furs that they hunted decades ago while living on the mountain.

Dawa said costume-making is important work. For him and his people, the traditional Lhopa dress is beautiful, and the younger generations can read their history in the clothing.

As the sky was darkening one afternoon, Dawa was making a costume but found it hard to see what he was doing, so he turned on an electric light. Instantly, the room was filled with brightness and warmth.

"I hope to pass on the tradition of Lhopa costume-making to my children and others in the village," he said. "Next, I want to conduct a workshop to pass along the skills."